Artist Marcio Carvalho picked monuments dedicated to Germany's first chancellor, Otto Von Bismarck, and King Carlos I from Portugal for his performance series "Demythologize That History and Put it to Rest." Here's why. 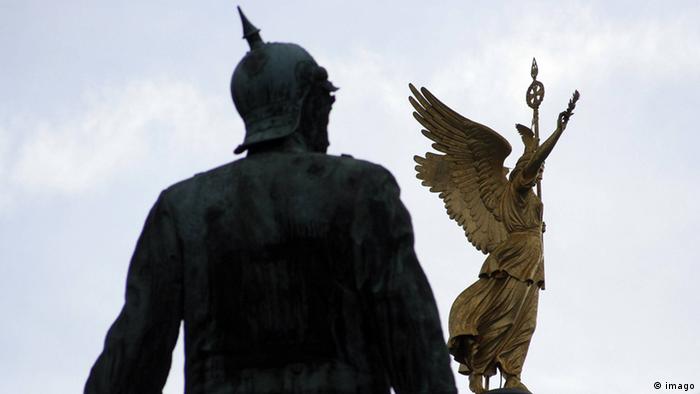 "This is an attempt to talk not just about colonialism," believes Portuguese artist Marcio Carvalho, "but about memory and how we remember our past," he told DW after the second part of his performance series, "Demythologize That History and Put it to Rest," held Saturday in Berlin's Tiergarten park.

A collaborative effort bringing Carvalho together with nine other international artists, the project will travel between Berlin and the Portuguese capital Lisbon between now and September. Exploring the notions of collective and individual memory in the context of public spaces and monuments, a series of public interventions are being held in front of the statues of two historical figures from the late 19th century — Germany's first chancellor, Otto Von Bismarck, and King Carlos I from Portugal. "My attempt is to counter-monumentalize these objects," the 36-year-old says. 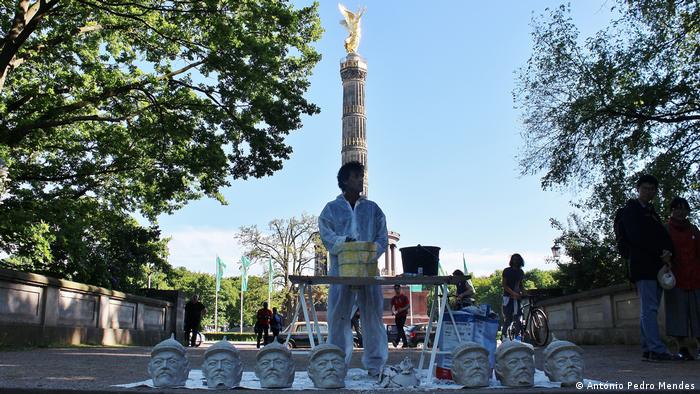 Iraqi artist Wathiq Gzar, seen here performing in front of the Bismarck statue, is one of Carvalho's collaborators

An emphasis has been put on these two statues because of their role in Europe's occupation of Africa, and how that legacy is remembered today.

Inaugurated in 1901, the Bismarck monument is said to highlight some of the leader's best virtues; an atlas with a globe on its back attests to the ruler's "titanic power," for example, while the oracle draped across an Egyptian sphinx celebrates his spiritual significance and his power over the decision about who should occupy Cairo – England or France.

As Carvalho points out, Bismarck went down in history as a victor, "because it was him and his comrades who were the ones writing it. Like Winston Churchill said, 'history will be kind to me for I intend to write it.' So the statue is certainly a symbol of violence."

Other critics say that since it stands without any historical context, it presents a Eurocentric version of colonial history that overlooks the violent, racist and imperialist legacy of the period on African communities.

This is something that Carvalho is seeking to challenge. "Working with these objects is a great opportunity to look at colonial pasts, because on the one hand in Portugal, there is this belief that among the European colonial enterprises, we were not the bad ones, that we were actually the kindest ones among all the bad. While in Germany, many people don't even know about their colonial history," he says.

The idea for the project started as a personal one for the Berlin-based artist, whose family comes from Portugal and Angola.

"My family roots are mixed — our Angolan roots go back to the late 19th Century and my father's side is a mix of black and white. So I started to ask my parents a lot of questions and then I went to Lisbon and started to see all these monuments."

It was there that the artist started to pay more attention to what he says are "spaces of power" — public spaces and monuments that carry a lot of power, but little contextualization. 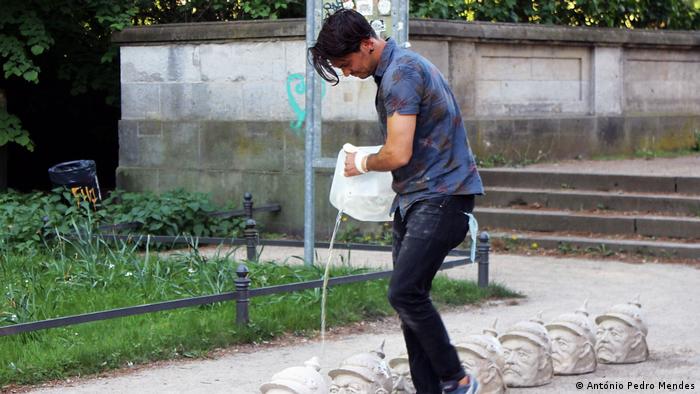 The links between Portuguese and German colonialism

One piece of context missing from these two statues is the link between Portugal and the German chancellor — one that would have a huge impact on the African continent. In 1884, Portugal asked Bismarck to host a meeting of other European leaders in Berlin to resolve issues around the resource-rich Congo region.

It was during this meeting, the Berlin Conference of 1884, that European powers carved up the continent between them. By formalizing the so-called "Scramble for Africa," the conference accelerated the colonization of the entire continent, creating many borders that still exist today.This legacy continued under King Carlos.

"In Portugal, there are many movements where people are starting to think about colonial history, but I haven't yet seen a project that bridges these two countries with such colonial past," Carvalho says. "Portugal asking Bismarck to put on the Berlin conference to solve the Congo issue became the starting point."

Performances inspired by a spiritual ritual of forgiveness

The series, which is supported by the Berlin-based gallery Savvy Contemporary, began in April with a performance by Cameroonian artist Christian Etongo. Described as an artist who explores the journey between "the ephemeral and the eternal," Etongo performed a spiritual ritual called Tso, where the person who has suffered is obliged to forgive in order for the future to be written in a better way. 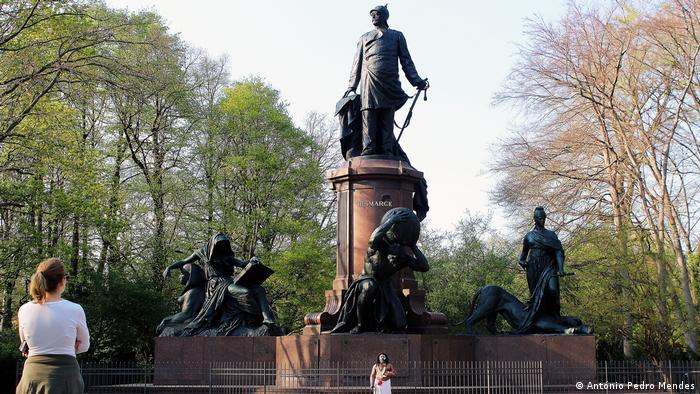 The event on Saturday was a collaboration with Iraqi Swiss-based artists Ali Toffan and Wathiq Gzar, who displayed their clay sculptures of Bismarck's head in front of the statue, alongside texts about the the Sykes-Picot agreement, the links between Bismarck and Hitler, among others, that were attached to the statue itself.

"History is always obsessed with fixing things, but then we have the Berlin conference, and then shortly after we have the Sykes-Picot agreement, a little later there is another land agreement and so on. History is being repeated, so I invited Toffan and Gzar because I thought it would be interesting to show how these ideas perpetuate — how they are perpetuations of the strategies of history itself," says Carvalho.

The next stop for Carvalho will be Lisbon on May 26, with Angolan artist Kiluanji Kia Henda. Other featured artists include Angela Ferreira, an artist and sculptor from Mozambique and prominent Berlin-based, Gabon-born artist Nathalie Bikoro.

Carvalho is keen to make this a long-term project and collaborate with people outside the art world.

"The statues are fixed so it's interesting to use performance, something that is ephemeral, and apply it to something that is fixed. The residue that stays from these performances will be in the memory of the people who watched it, as well as the pictures and the videos," says the artist who has focused his studies on memory, using notions of neuroscience and socio-psychology to revisit his own family history.

"This statue has a very specific rule; it is staying, generation after generation," he adds. This is why Carvalho feels it is part of "the fight" to add something to such monuments in order to contribute to their contextualization and to creating another type of projection for their future.

Why a German museum is exploring its colonial past

For the first time in Germany, a museum is publically digging into the colonial roots of its own collection. Curator Julia Binter tells DW how looking at the past can change how we view "foreigners" today. (07.08.2017)

Local authorities in Berlin's African quarter have decided to rename three streets bearing the names of colonialists. The decision has left many residents in the German capital angry. (20.04.2018)