The 2018 Winter Olympic Games wrap up with colorful closing ceremony

The 2018 Pyeongchang Winter Olympic Games have drawn to a close. IOC President Thomas Bach praised athletes from South and North Korea for demonstrating their belief in peace. 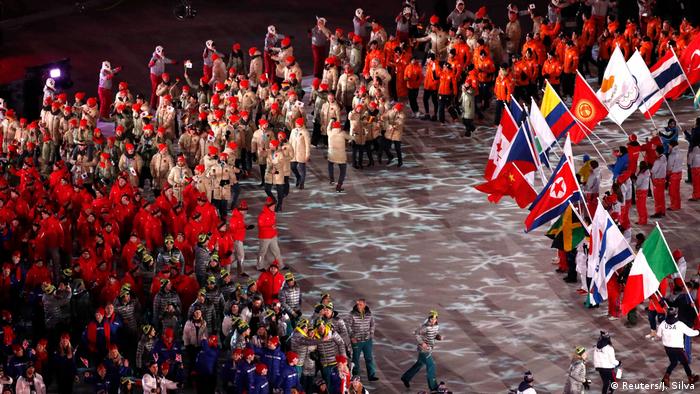 The 2018 Winter Olympic Games in Pyeongchang in South Korea have come to an end with a closing ceremony that ran for about two hours.

Spectators in the stadium were treated to plenty of bright lights, various types of pop music, and even a couple of medal ceremonies.

The president of the International Olympic Committee (IOC), Thomas Bach, used his speech to praise athletes from both South and North Korea, who competed as a united team at these Games, for demonstrating their belief in "a peaceful future." He said the IOC would "continue this Olympic dialogue" after the Games are over.

The IOC president then declared the Pyeongchang Games closed and called on young people of the world to gather for the next Winter Olympics in four years time in Beijing.

13:54 - And the Olympic flame has been extinguished! These Winter Games are well and truly over!

13:49 - The surprise package opens up to reveal a crystal ball representing Pyeongchang, as video of moments from these Games are beamed onto the floor of the stadium around it.

13:44 - Before the flame is extinguished though, we are treated to the dulcet tones of a South Korean boy band.

13:40 - Thomas Bach declares the Games over and calls on the young people of the world to gather again in four years time in Beijing.

13:39 - Athletes representing each of the continent are called up to the stage. Of course the lad from Tonga is shirtless again...

13:38 - The IOC president also thanks the volunteers at the Games, as well as the entire population of the host country.

13:37 - Bach uses the speech to praise the spirit of peace between the two Koreas at these Games, and thanks the athletes, television rights holders and the corporate sponsors.

13:26 -  IOC President Thomas Bach greets the stadium in Korean as he begins his speech.

13:15 - As is the custom at closing ceremonies, the mayor of the current Olympic city hands over the Olympic flag to the IOC president, who presents it to the mayor of the next Olympic host, Beijing. Then the Chinese flag is raised.

13:03 - The many volunteers who helped make these Games possible are being recognized. Four of these volunteers are presented with bouquets of flowers, which they accept on behalf of  their colleagues.

12:58 - Now the cultural program has resumed, something that is always left open to interpretation - unless you happen to be privy to the plans.

12:56 - As mentioned earlier, former NHL defenseman and now silver medalist Christian Ehrhoff has the honor of being Germany's flag bearer at the closing ceremony.

12:52 - Now it's time for the medalists from the men's 50km marathon mass start in cross country to receive their medals after their race on Saturday. Two athletes from Russia finished behind Finnish gold medalist Iivo Niskanen.

12:46 - Marit Bjoergen won gold in the event earlier in the day. Finland's Krista Parmakoski won the silver medal and Stina Nilsson of Sweden took bronze. This was the 15th Olympic medal of Bjoergen's career, making her the most successful Winter Games athlete of all time. The win also took Norway to the top of the medals standings.

12:42 - Now the spectators are being treated to the medal ceremony for the 30km women's cross-country mass start.

12:31 - The Germans are now making their way into the stadium. Among them are members of the men's ice hockey team, who made history earlier in the day by winning the silver medal for this first time. They look well and truly to be over their disappointment at losing to the Olympic athletes from Russia in overtime in the gold-medal game.

12:27 - Athletes continue to enter the stadium, some carrying GoPro cameras, some taking selfies with their mobile phones.

12:20 - Traditionally, the closing ceremony is much more relaxed than the opening ceremony, and this is also the case here.

12:18 - The athletes are now proceeding into the venue, many of them carrying smaller versions of their national flags.

12:11 - The heavy-metal solo guitarist is joined by other instrumentalists. Not sure what to call this music - like a combination of heavy metal and classical. This isn't your father's Ted Nugent. But it's not your father's Beethoven either...

12:08 - Now a bit of heavy-metal guitar played by a 16-year-old South Korean. Not bad! Dancers dance on the ramp up towards the Olympic Flame, which has burned bright for just over a fortnight in Pyeongchang.

12:06 - The South Korean flag is brought into the arena, and now the host country's anthem is sung by a male vocalist backed up by some children.

12:04 - The South Korean president, Moon Jae-in, and IOC President Thomas Bach arrive in the VIP area, where Ivanka Trump, the daughter of the US president waits to greet them.

12:00 - The closing ceremony begins like clockwork, with a colorful display inside the stadium in Pyeongchang and a short burst of fireworks.

11:59 - The closing ceremony is just about to start. Germany's flag will be carried by ice hockey silver medalist Christian Ehrhoff. The gold-medal winners in ice hockey, the Athletes from Russia will not be allowed to carry their national flag into the stadium, as Russia remains suspended by the IOC over evidence of state-sponsored doping contained in a WADA-commissioned report.

11:50 - Norway topped the medals table with that last gold medal won by Marit Bjeoergen earlier on Sunday. That pushed Germany into second place, ahead of Canada, who, despite their problems in curling and ice hockey, had their best Winter Games ever.

11:49 - Another four years have come and gone and the Olympic flame is soon to be extinguished in Pyeongchang. First, though, it will be time for the closing ceremony, always a colorful affair.