Marit Bjoergen has won the final event of the Pyeongchang Olympics, taking gold in the women's 30km mass start classic. Her gold medal took Norway to the top of the medals table, just ahead of Germany. 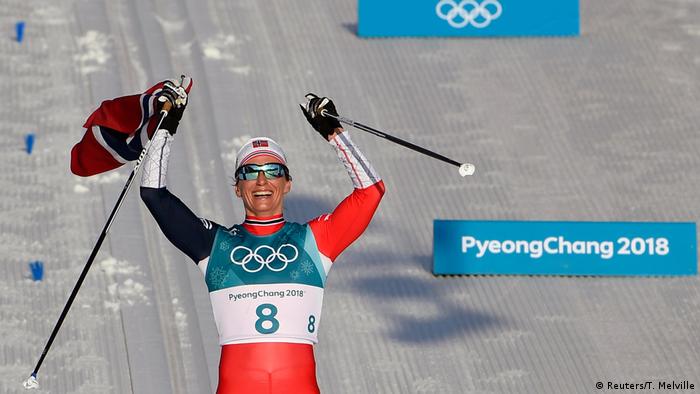 The gold that Marit Bjoergen took in the 30km women's cross-country event on Sunday was the 15th Olympic medal of her career, the most ever won by an athlete at the Winter Olympics, and it also took Norway to the top of the medals table.

Earlier at these Games she had already passed fellow countryman Ole Einar Bjorndalen, who had previously been the most successful Winter Olympian with his 13 medals.

The cross-country legend, 37, signed off in style after a glittering Olympic career as she won 1min 49.5sec ahead of Finland's Krista Parmakoski, as Stina Nilsson of Sweden took bronze.

After the final event of the Pyeongchang Winter Olympics, Norway and Germany both have 14 gold medals. But the Norwegians have a record 39 medals overall, compared to Germany's 31.