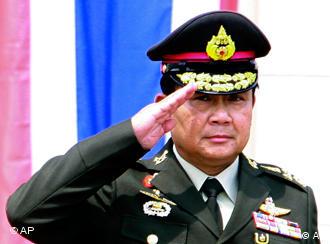 Although Thailand's new army chief General Prayuth Chan-ocha played a key role in dispersing anti-government protests in Bangkok earlier this year, he has said he hopes the army will step back from politics.

However, at the official handover ceremony on Thursday, General Prayuth warned that the army was ready to play a role if there were further conflicts and Thailand failed to return to order. 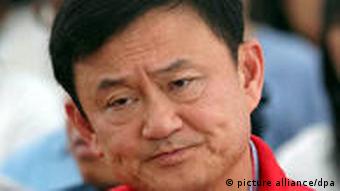 Former President Thaksin Shinawatra was ousted in a coup in 2006

In the spring, over 90 people died and almost 2,000 were injured in the most severe political violence Thailand had witnessed in almost two decades. Red-shirted supporters of former Prime Minister Thaksin Shinawatra had taken to the streets to press for new elections.

The "Red Shirts" oppose Abhisit Vejjajiva's government, which came to power in 2008 with the support of the army and the so-called "Yellow Shirts," who represent the pro-monarchist middle class that backed the 2006 coup against Thaksin.

"The Red Shirt – Yellow Shirt divide raises the role of the military in case the government comes under real threat," said Carl Thayer, a defense analyst at Australia’s University of New South Wales. "The 2006 coup against Thaksin and in defense of the monarchy, and the continued role of the military in the South are examples. The military in Thailand always has the potential to intervene politically."

"The pro-Abhisit establishment and the powers that be are hunkering down for the long haul and Prayuth is their man. He could be in power for another four years – crucial in Thai politics because of the road towards the succession. The confrontation between the Reds and the Yellows is going to continue." 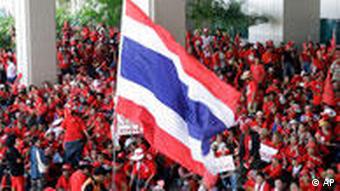 A reversal of democracy

Analysts have accused the army of a lack of transparency in several armaments purchases. Others warn that the military's higher profile could lead to further media censorship and there is concern about human rights abuses.

Since Thailand became a constitutional monarchy in 1932 there have been 18 coups or attempted coups.

Earlier this year, 90 people were killed in the worst political violence in decades

When Thaksin was in power, he made certain army appointments in the hope of preventing yet another coup but failed in the end. He is accused of abuse of power and corruption whilst in power but he has a strong camp of followers, especially in Thailand's poorer rural areas.

In a bid to bridge the divide between the military and the Red Shirts, General Prayuth has said he will meet the families of those who were killed during the military dispersal of the protests in April and May.

Thai protests go from the streets to cyberspace

In Thailand, the government has been shutting websites to control online criticism of it and the monarchy. Analysts say the government needs to find a less hard-line approach. (12.08.2010)

Thailand's government has extended the state of emergency. In nearly one third of the country, including the capital Bangkok, a number of restrictions will remain in force for another three months. (06.07.2010)

The roots of the Thai crisis

The confrontation between the Red Shirts and the Thai government has its roots in the rise of populist politician Thaksin Shinawatra, who was elected Prime Minister in 2001. (19.05.2010)