Thai Prime Minister Prayuth Chan-ocha has ordered security to be tightened in Bangkok after two small bombs were detonated near a luxury shopping mall. The capital has been under martial law since a coup in May 2014. 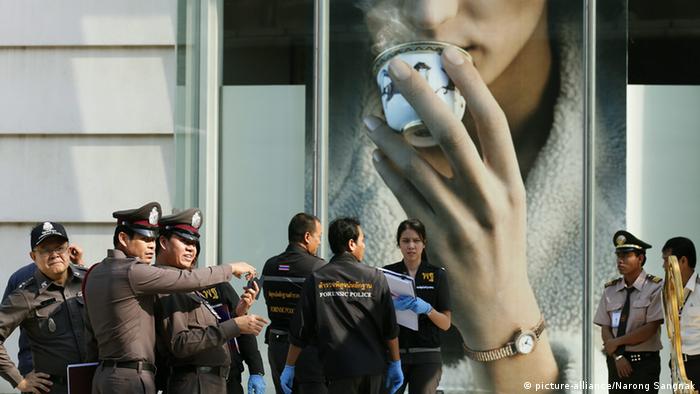 The two homemade pipe bombs left two passers-by with minor injuries after they exploded near Paragon mall at around 8 p.m. local time (1300 GMT) on Sunday evening.

"I have ordered security to be tightened because this case involves the well-being of the people," Prayuth told reporters.

"This case shows that we still need martial law ... there are still bad people disrupting the peace. We must find ways to severely punish them," he said.

Authorities declined to speculate whether the small bombs were linked to the nation's turbulent politics. Prayeuth added, however, that although the bombs did not cause major damage, "they were used to create trouble."

The Southeast Asian country has been under martial law since a coup toppled the elected government on May 22 last year.

Despite growing calls from rights groups and the international community for the draconian law to be abolished, the Thai junta has continued to justify the martial law by saying Thailand's bitter political divisions need more time to heal, while they set about remodeling the kingdom's political structure.

CCTV footage showing two possible male suspects near to where the pipe bombs exploded on Sunday has emerged. Police said, however that the images were unclear and the suspects had not been identified.

Thailand has been plagued by almost a decade of political turmoil after billionaire former premier Thaksin Shinawatra rattled the establishment by winning elections with his populist politics.

Since 2001, every election has been won by a party led either by Thaksin, his family, or affiliates, in which time the kingdom has faced two coups and the removal of three premiers by Thailand's interventionist courts.

Just last month Thaksin's younger sister Yingluck, who was toppled by a court shortly before last year's coup, was banned from politics by the junta-stacked National Legislative Assembly over a costly rice subsidy scheme.

She now faces criminal charges and a possible jail term linked to the populist policy.

German NGO Friedrich Ebert Foundation has been ordered by Thailand's military government to cancel a briefing on media freedom. The ban is seen as part of a crackdown on freedom of expression. (29.01.2015)