Thailand's capital Bangkok has been sinking for years and time is running out to tackle the problem. As the ground continues to subside by 3 centimeters (1.2 inches) a year, scientists say action is urgent. 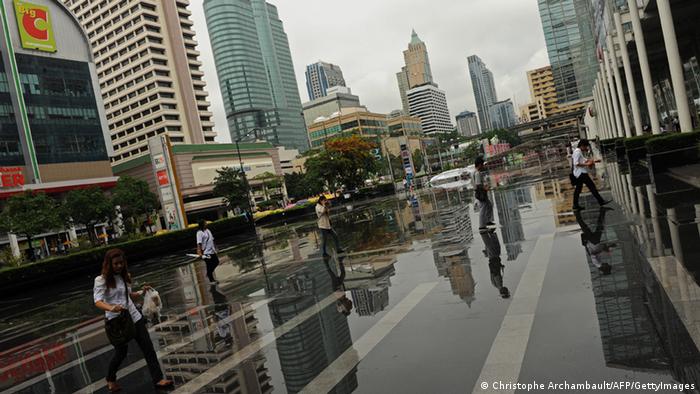 The government has been ignoring the fact that Bangkok is sinking for years, scientists in Thailand said. According to the national agency that provides satellite images to update on disasters like the 2011 floods, Bangkok's problem may be even worse than previously thought. The city of 10 million people could be sinking faster; and experts warn there are only seven to 10 years left to tackle the problem.

"Adding those two figures together means the absolute sinking rate of the ground is around three centimeters or 30 millimeters at least per year. It's fast - much faster than we thought." 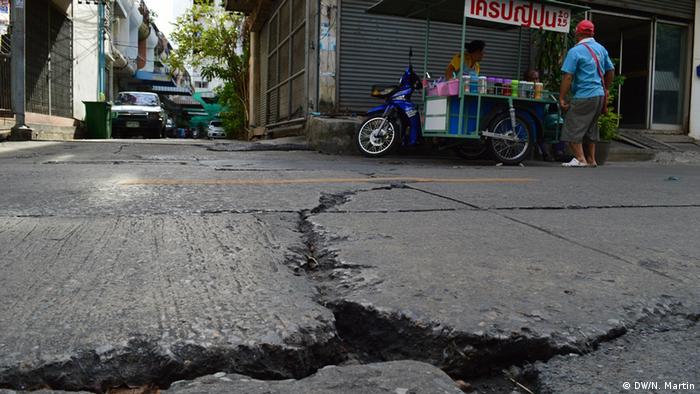 Sanitwong warns that - considering the devastation caused by the 2011 floods - the latest data is a major cause for concern. "It doesn't mean the whole area is going to be flooded, but it does mean, especially during high tide, we are going to have a big problem with drainage."

According to Sanitwong, more than 50 percent of the sinking has been caused by the tapping of groundwater by industry. Although the practice has been banned, it still goes on. The sheer weight of all the modern buildings that fill the Bangkok skyline are also contributing to the problem.

Created and undone by climate change?

"A thousands years ago, all of Bangkok was flood land," Sanitwong explains, pointing out that the 230-year-old city itself only exists because of historic climate change.

The city is therefore particularly sensitive to any alterations in the climate and seriously at risk should anything change again.

"We believe we are in the phase where we have less strong winds and storms in this particular area. So thus no more mechanism to bring in the sediments and the clay from the sea, the ocean," Sanitwong warns.

And that means Bangkok is also threatened by the rising sea level.

Scientist Art-Ong Jumsai, former Deputy Minister for Foreign Affairs and currently Director of the Institute for Sathya Sai Education, has been warning successive Thai governments about the problem for years. But he says his dire predictions have fallen on deaf ears. 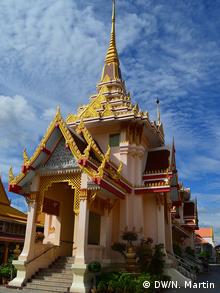 Many historic sites - like this temple - are especially at risk

"Nobody is taking the lead in the government. They are only looking at the next election. And people don't like to hear this. The government has to consider business interests, it also wants to attract more tourists. So they don't want people to talk about anything that is negative."

With even more shopping malls opening and a boom in high-rise condo developments across the city, officials are fearful of spooking investors. And while modern buildings are built with foundations running several meters into the ground, the city's temples and historic structures don't have the same support.

"The ancient buildings are in greater danger because they don't have the foundations," Jumsai explains. "Many temples are having problems because the water has come up and is encroaching on them. In Ban Khun Tian which is a part of Bangkok one temple is in the middle of the sea with the water level right up. So they have already lost the lower level of the temple itself."

How to fight the problem?

Scientists are divided though on how to tackle the problem. Some have suggested better management of building land. One radical idea suggested the capital be moved to the north of the country. Others suggest that natural defences like mangrove swamps are strengthened along the Bay of Bangkok. 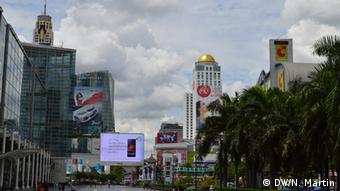 Jumsai thinks officials need to build a series of huge dikes along the Gulf of Thailand. He says a multi-billion dollar investment is required to protect Bangkok in the same way the Netherlands - which is also below sea level - protects itself from natural disasters.

"In order to prevent the flooding of the central area of Thailand, it's not just Bangkok, it's a huge area where we have a lot of agriculture, we need a wall along the seafront and this will prevent flooding in the future. If we can pump out water over the wall in the future, this will solve the problem for many years to come."

Scientists don't have to go far for further proof that Bangkok is sinking. At Chulalongkorn University in the centre of Bangkok, many of the 50- to 100-year-old buildings have a marked line about 50 centimeters up showing where the ground level once was.

Cities both contribute to and suffer from climate change

Germany is leading the way in urban climate research, and its universities approach the issue in different ways: some use data, others rely on human perception. (27.11.2012)