The mother of a Thai student activist was indicted by a Thai military court on royal defamation charges. She had sent a one-word Facebook message. 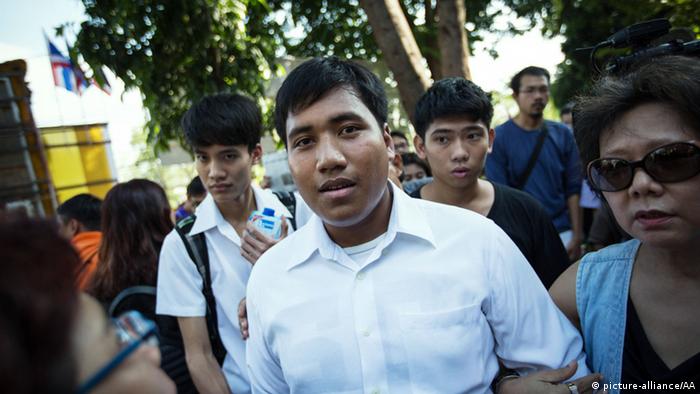 Patnaree Chankij allegedly insulted the monarchy by replying "yes" to a Facebook message sent by an activist friend of her son. The tribunal found that the message was deemed to have anti-monarchy content. The sender was also arrested and charged. Human rights groups have described the incitements as a new low for the junta's crackdown on dissent.

Patnaree could face up to 15 years in prison if found guilty following her indictment. She was released on bail of 500,000 baht ($14,000 or 12,500 euros), according to her lawyer. Police had dropped the charges earlier in the year following the public outcry, while still forwarding the case to prosecutors from the military who have decided to press ahead.

Patnaree's son, Sirawith Seritwat, is a student activist with the pro-democracy groups New Democracy Movement and Resistant Citizen, which authorities regularly target on account of their activities being considered subversive to the current Thai leadership.

Thailand has a strict law that protects the king and his family from defamation, insult or threat. Each offence against the law is punishable by up to 15 years in prison. Critics argue, however that the law is often abused to advance political agendas.

Arrests on suspicion of lese-majesty have increased since the royalist military junta took power following a coup two years ago. Record-breaking 25 and 30 year sentences have since been handed down for people over Facebook post, one man found himself arrested for making sarcastic comments about the king's late dog. Even a 'like' on Facebook is regarded as a sign of agreement with potentially defamatory statements.

This latest indictment comes ahead of a referendum on the junta's new proposed constitution, marking the first time that Thais will get to head to the polls since the coup. Military generals say their charter - the twentieth in the country's history - will bring stability following a decade of political turmoil. But critics say it is a naked attempt to perpetuate the military's grip on power.