Unknown attackers have fired on a military parade in the southwestern Iranian city of Ahvaz, state television says. Scores of people were reported to have been killed and injured. 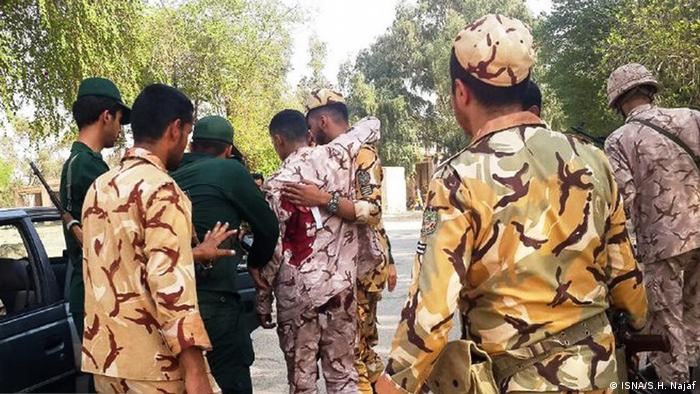 At least 25 people were killed and many wounded on Saturday after gunmen attacked a military parade in the southwestern city of Ahvaz held to mark the start of Iran's 1980-88 war with Iraq, according to Iran's state-run IRNA news agency.

"There are a number of non-military victims, including women and children who had come to watch the parade," the agency cited an unnamed official source as saying.

It said at least 53 people were wounded in the attack. State news agencies reported that half of the dead were members of the elite Revolutionary Guards. The death toll is expected to rise.

Early reports called the attackers "Takifiri gunmen," a description that has previously been used for members of the "Islamic State" (IS) group. A statement on the Amaq news agency, which is used by IS as a mouthpiece, claimed the group was behind the attack, though this has not been verified.

The attack was carried out by two gunmen on a motorcycle, according to the semiofficial Fars news agency.

Iranian President Hassan Rouhani vowed a "crushing" response, saying on his official website that "those who give intelligence and propaganda support to these terrorists must answer for it."

Foreign Minister Mohammad Javad Zarif said on Twitter that the attackers were "terrorists recruited, trained, armed and paid by a foreign regime," but did not elaborate.

He blamed regional countries and their "US masters" for the attack, adding that Iran would respond "swiftly and decisively."

A spokesman for the Revolutionary Guards, however, alleged that the attackers were separatists backed by Saudia Arabia, Iran's regional archrival.

Russian President Vladimir Putin expressed his condolences to Iran, saying he was "appalled by this bloody crime" against Russia's ally.

"We hope that all the perpetrators will bear the punishment they deserve," he said.

The government of Syria also expressed its "full sympathy and solidarity" with Iran, while Turkey slammed a "heinous terrorist attack."

Ahvaz is the capital of Khuzestan province, an oil-rich region where Arab separatists have been known to attack oil pipelines in the past. The province has a large ethnic Arab community, many of them Sunni, the Muslim denomination to which IS adheres and which is a minority in Shiite Iran.

Iran also suffered major attacks by IS extremists on June 7, 2017, when militants assaulted the parliament and the shrine of Ayatollah Ruhollah Khomeini in the capital, Tehran. At least 18 people were killed and more than 50 wounded in the attacks.