Terrorists Brought to Trial in Berlin | Germany | News and in-depth reporting from Berlin and beyond | DW | 14.11.2001

Terrorists Brought to Trial in Berlin

A Berlin Court rules that Libya was involved in the 1986 bombing on the La Belle discotheque which killed three people. 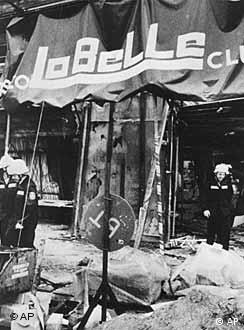 Firemen searching through debris after the 1986 bomb attack at the La Belle.

On April 5, 1986, Verena Chanaa and her sister walked into the La Belle with a bag containing a bomb. They departed the West Berlin nightclub packed with American soldiers again quickly. Minutes later, the two kg bomb exploded, killing three people and injuring more than 200.

Amid tight security, the Berlin State Court (Landesgericht) on Tuesday convicted Verena Chanaa of murder and attempted murder. It sentenced her to 14 years in prison.

The Court also convicted three other defendants, including an ex-Libyan diplomat, and sentenced the men to between 12 and 14 years in prison. The charges against Verena Chanaa's sister were dropped. Prosecutors had sought life sentences against the four suspects.

Libya behind the Attack

Berlin State Court judge Peter Marhofer said it had been proven that Libya was involved in the attack. "Libya bears at the very least a considerable portion of the responsibility for the attack," Marhofer told the court.

Prosecutors argued during the marathon four-year trial that Libya's secret service ordered the attack. It wanted to avenge the sinking of two Libyan patrol boats by the US in the Gulf of Sirte in March 1986.

The La Belle attack - that killed two American soldiers and a Turkish woman - led US President Ronald Reagan to order bomb strikes on Libya. The US had said that it had intelligence wiretaps linking Libya to the attack.

The Fall of the Berlin Wall brought new Insights

The La Belle investigation proceeded haltingly. Prosecutors trying to establish links to Libya stumbled around unsuccessfully for years. US and German intelligence agencies did not assist the inquiry.

But the collapse of the Berlin Wall in 1989 brought new clues. Investigators discovered secret documents from communist East Germany.

Prosecutors at the trial presented telegrams sent from the Libyan embassy in East Berlin to Tripoli before and after the attack. This strengthened the suspicion that Libya was behind the bombing.

Hundreds of witnesses, muddled facts, as well as retracted and in part altered confessions dragged out the trial.

A protocol leak of the German federal government caused the most recent stir. Chancellor Gerhard Schröder's foreign policy advisor Michael Steiner said at a meeting with US President George W. Bush that he had met Libyan leader Muammar Gaddafi.

During that encounter, Gaddafi had admitted that Libya took part in terrorist actions such as La Belle. But he clarified that he had abandoned terrorism.

The notes of the meeting were accidentally leaked. Prosecutors of the La Belle trial then tried to summon Steiner to testify, but the German government blocked this, citing interests of national security.

In addition to the German Verena Chanaa, Palestinian Yasser Shraydi was convicted on three counts of murder and 104 counts of attempted murder. Shraydi worked in the Libyan embassy in East Berlin and organized the attack. He was sentenced to 14 years in jail.

From the CIA World Factbook