German police ordered a large-scale evacuation at Rock am Ring music festival in early June after failing to identify two Syrian workers. It turned out that the workers' names were misspelled, officials told the media. 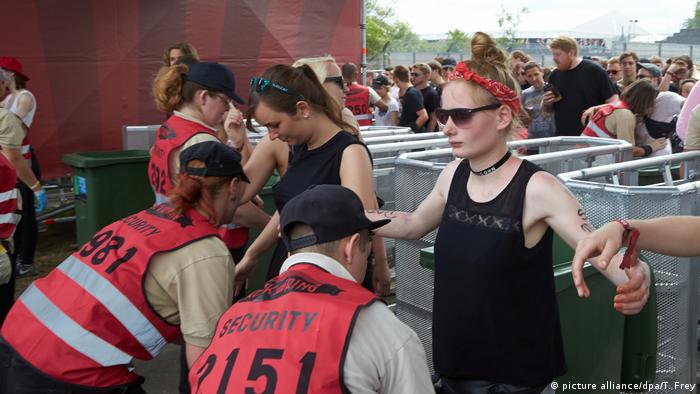 German authorities say the Rock am Ring festival can proceed as planned after it was halted on Friday night because of terror fears. The suspension came amid tight security following last month's attack in Manchester. (03.06.2017)

Citing a possible terror threat, German police have temporarily pulled the plug on the Rock am Ring festival at the famous Nürburgring race track in western Germany. Visitors were told to clear the festival grounds. (02.06.2017)

British authorities are fuming after US media published leaked crime scene images from the Manchester bombing. The bomber may have passed through Dusseldorf on his way to Manchester, according to intelligence sources. (24.05.2017)

The two freelance teamsters wore bracelets allowing them unlimited access to the crowded event at the Nürburgring, German media reported on Wednesday. However, police officers raised the alarm when they could not match their names to the list of staff provided by the organizers for the event on its opening night, June 2.

"The names of the suspects were misspelled," state investigative police chief Johannes Kunz told the Allgemeine Zeitung from Mainz.

According to statements provided at the time, the authorities suspected a terror plot possibly linked with local Islamists in the state of Hesse. The fears were likely boosted by the recent terror strike in Manchester, when a suicide bomber killed 22 visitors at an Ariana Grande concert.

"The situation was already very serious, because we could not rule out the possibility of concrete preparations for a strike," Kunz said.

Faced with this information, the police ordered a full evacuation of the festival on its opening night, prompting 87,000 visitors to leave the grounds, including DW's music journalist Rick Fulker.

Authorities then conducted a search of the site and gave the all-clear signal the next day, allowing the festival to continue.

According to media reports, the two detained Syrians were hired by a sub-contractor on a short notice.

In order to avoid confusion in the future, Kunz urged the organizers to "provide personal documents ahead of time." Germany's top police officials also discussed the issue, according to the public broadcaster SWR. They aim to improve the security procedure by adding photos to all employees' passes, which would help the police verify their identities.