German Rock am Ring music festival halted over terror threat | Germany| News and in-depth reporting from Berlin and beyond | DW | 02.06.2017

Citing a possible terror threat, German police have temporarily pulled the plug on the Rock am Ring festival at the famous Nürburgring race track in western Germany. Visitors were told to clear the festival grounds. 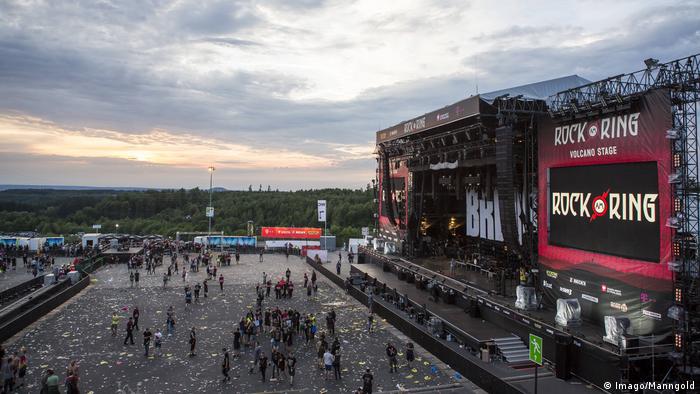 Authorities suspended the crowded event on its opening night on Friday, asking the visitors to leave in a "controlled and calm" manner. The preemptive move was based on "concrete leads, which do not allow us to eliminate a possible terror threat," the police said, adding that "safety comes first."

"We are currently conducting a very intense investigation," authorities said.

The state interior minister of Rhineland-Palatinate, Roger Lewentz, was scheduled to address the media on Saturday morning.

German Interior Minister Thomas de Maiziere backed Lewentz's "difficult and responsible" decision to temporarily halt the festival, saying: "As bitter as it is, the safety of festival-goers must be the top priority."

DW's Rick Fulker tweeted there were "many glum faces" at the scene, while also saying that people were "very calm" during the evacuation.

The three-day festival was expected to welcome up to 90,000 visitors with German hard rock giants Rammstein set to perform later on Friday.

The organizers used loudspeakers to inform the visitors about the possible threat.

"We hope it will continue tomorrow. Please head to the exits," they announced.

Some 85 bands and musicians were due to perform at the event, including the German punk group Die Toten Hosen and the US heavy metal band System of a Down. One of the organizers, Marek Lieberberg, said the police blocked off the surrounding streets. Shuttle buses are still running, he said.

Many visitors initially chose to stay at the Rock am Ring field, considering the area safer than the camping grounds, according to Fulker.

The police said there was no agreed timeline "for us to give the all-clear signal."

The evacuation proceeded relatively quickly, with thousands of visitors leaving the compound in about half an hour. Lieberberg congratulated the visitors for their speedy response.

"Our audience has responded fantastically," he said.

The police had decided to boost security at the event even before the Friday announcement. With Europe still reeling from the devastating attack at a concert in Manchester, German authorities deployed some 1,200 security personnel at the Nürburgring race track. The organizers banned bags and backpacks on the grounds.

In addition to the Rock am Ring festival, some 85,000 music fans  were attending the nearby Rock am Park event in Nüremberg, designed as a twin to the older event held at the race track. The shows there proceeded on schedule, according to reports from the scene.