Nearly 130,000 people were killed in Indonesia's Aceh province when the 2004 tsunami struck - the largest death toll in any single area. Journalist Kira Kay talks to DW about how the disaster has reshaped people's lives. 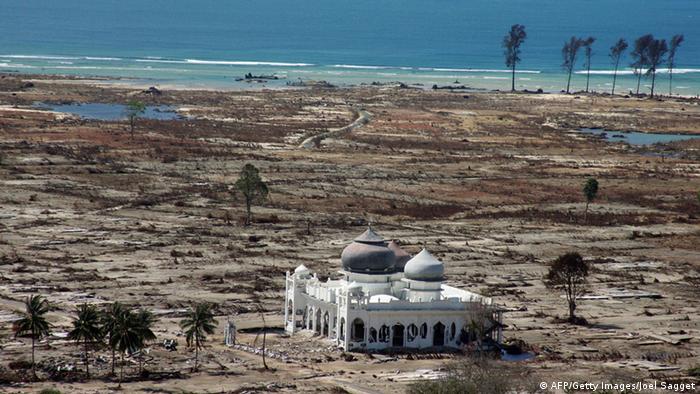 In the early morning hours of December 26, 2004, a magnitude 9.1 quake off the coast of Indonesia's Aceh province triggered one of the worst natural disasters on record, killing more than 220,000 people across a dozen countries. With almost 170,000 casualties, the Indonesian archipelago bore the brunt of the tsunami, followed by Sri Lanka, India and Thailand.

The province of Aceh, located at the northern end of Sumatra was the first hit, with waves of up to 35 meters, killing tens of thousands and causing massive devastation. The Indian Ocean tsunami also prompted an unprecedented humanitarian response and an international relief and reconstruction effort.

Kira Kay, Executive Director of the Bureau for International Reporting (BIR), visited the region shortly after the tsunami and ten years later. In a DW interview, the award-winning journalist talks about how the disaster not only led to a massive reconstruction effort, but also to some unintended positive effects such as bringing about an end to Aceh's civil war. 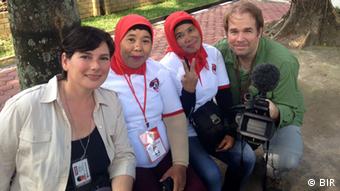 Kay: 'An expansive tsunami response program has been established in Aceh'

DW: How did you witness the tsunami in Indonesia ten years ago?

Kira Kay: My visit to Aceh post-tsunami was actually not my first trip there. I covered the little-known but very deadly civil war in 2002, at a time when the Indonesian military was pushing hard against the Acehnese pro-independence rebels. So I knew Aceh already as a "land under siege," if you will.

But to see the landscape I had filmed in 2002, so thoroughly altered by the tsunami, was shocking. The entire communities I had visited were wiped out. Only the shattered outlines of building foundations and stairs to nowhere remained. You could see the waterline on the side of the mountains by where the trees had vanished and nude rock remained. In some places this waterline was estimated to be 70 or even 80 feet high.

I arrived in early 2005, about two weeks after the tsunami hit. The immediate emergency response was well underway; people were beginning to receive basic food and shelter. The hope of finding survivors was dwindling. But by early January, the horror of what had happened was actually setting in and people were beginning to wonder what would come next. The task seemed overwhelming.

Around 130,000 people in the Aceh Province were dead and about 30,000 more were still missing. Hundreds of thousands of people were homeless, and any land records they once had to prove their original ownership had been washed away. Bodies remained under rubble; the body retrieval caravans – some of them run by Islamic civil society groups – were dumping them by the truckload into mass graves. The stench was terrible.

But even in those dark days, even if it wasn't clear then what next steps were going to be, the determination of the Acehnese people, sculpted by decades of surviving a civil war, was loud and clear: they would rebuild and start life again.

How has the disaster reshaped people's lives in the most affected areas such as the province capital city, Banda Aceh?

I returned to Aceh this summer and it was hard to recognize a lot of Banda Aceh, and its immediate neighborhoods that were so badly hit. Many of the buildings are new or significantly repaired. New housing communities have sprung up – some of them a bit cookie-cutter, as they are built by the same responding aid agency and in as quick a time frame as possible, but people say they feel at home.

Many Acehnese have rebuilt near the sea where they used to live, because they say their economic livelihood is there – fishing and rice farming in particular – and because it is their ancestral land. But other families have moved to the hills where they feel safer and where international donors established whole new mini-towns. There is even a neighborhood called "Jackie Chan Hill" that was funded in part by the movie star. Roads are also rebuilt, mostly by international donors.

Overall, the physical reconstruction has been impressive. Even if there was some corruption and shoddy work in the immediate recovery period, it has generally come together quite well 10 years later. The Indonesian government can be credited with allowing international aid organizations to respond quickly, while providing suitable coordination oversight to minimize duplication and target need.

What about changes on the psychological level?

It is a bit harder to say. While there was a mental health response by the international community, it wasn't sustained long term by the government. Several people told me they felt that this was a significant gap in the overall recovery of the region. Some trauma is evident; when large twin earthquakes hit Aceh a couple of years ago, a lot of people panicked and were paralyzed in their response.

On the other hand, several people told me that their strong religious faith had helped mitigate their pain. There is a sense that while the civil war was "man-made," the tsunami was "God-made," and is therefore easier to accept in some ways. In fact, Aceh has become more religiously observant since the tsunami, as many people saw the tsunami as God's punishment for their immorality, evidenced by the fact that many mosques remained standing even as villages around them were wiped out.

Aceh was always more conservative than other parts of Indonesia, in fact the nickname for Aceh is "the Porch of Mecca" as it is at the tip of the country facing Saudi Arabia: But in recent years, there has been an increased implementation of the region's special Shariah laws, including rules governing the clothing of women and moral behaviors generally.

An Indonesian family separated for a decade by the 2004 tsunami say they now want to find their son. The couple were recently reunited with their 14-year-old daughter Jannah, renewing hopes their son is also alive. (08.08.2014)

What effect did the outpouring of international help have on the community?

The gratitude of the Acehnese is palpable: the downtown park has been turned into a "Monument of Thanks" with each of the 53 responding countries acknowledged by individual markers. There is also a very impressive museum dedicated to the tsunami – a fascinating experience but one that is not just for tourists; in fact when I visited, it was filled with Acehnese themselves. The museum is part exhibit and part learning experience, with a whole section about the science behind the tsunami and the earthquake that caused it.

More interestingly, the presence of the large international community had an unintended positive side effect: this opening to the world in part helped end Aceh's civil war, by flooding this once-restricted region with outsiders and ensuring that a fragile peace agreement, signed just months after the tsunami, would hold. I think the international response made Acehnese realize they weren't as isolated a region as they thought they were, giving them a reason to commit to peace. And the Indonesian government knew they had a lot to lose in terms of aid if the war restarted.

The tsunami brought a massive, sudden tragedy, but it simultaneously ended what had been a long, psychologically draining experience of civil war. It was a chance to start fresh in many ways. And I believe the Acehnese have made a lot of that opportunity. This summer I was glad to reconnect with friends I had made during the war and then also during the tsunami recovery, and they unanimously expressed their lives as feeling "normal" for the first time in their memory.

Are these communities now better prepared?

An expansive tsunami response program has been established in Aceh. The national Syiah Kuala University, based in Banda Aceh, houses the Tsunami and Disaster Mitigation Research Center, which oversees the program. There are now tsunami siren towers placed around Banda Aceh, which sound when beacons out at sea register an earthquake seven or higher on the magnitude scale.

There are also escape towers, officially called "vertical evacuation sites" – several floors high, built to withstand the impact of water and equipped with a helipad on top – that people are meant to run to when the sirens sound. The coastal road has been widened to better facilitate evacuation, and escape route signs are prevalent.

Syiah Kuala has also become a hub for disaster response training: the university offers a Masters program, drawing students from around the region and abroad; and all students at the university must take disaster mitigation classes, regardless of major. 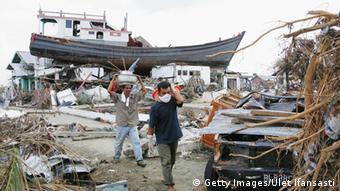 Kay: 'Overall, the physical reconstruction has been impressive'

But getting citizens to properly respond to, and utilize, the emergency system has proved challenging. When the twin earthquakes hit a few years ago, people instinctively ran for the hills instead of the evacuation centers, jamming streets with vehicles. The police were not much help in managing the chaos. So there is still a lot of work to be done – especially to reach communities further outside the urban area, who may still have informational gaps or cultural resistance to proper emergency response.

To what extent did the tsunami impact aspirations in Aceh for independence?

The 2005 peace agreement has held well and the independence rebels became a political party and have joined the regional government. There are special autonomy laws that Aceh now has, for example reaping a greater share of natural resource revenue and the implementation of Shariah law, referenced above, that has quelled a lot of the separatist feelings in the area. But I believe Acehnese will always feel they are "different" from the rest of Indonesia. Their pride in their history and culture still takes precedence over national identity.

Kira Kay is Executive Director of the Bureau for International Reporting (BIR) – a non-profit organization dedicated to producing and providing vital international television news programming. She was the recipient of the 2008 Robert F. Kennedy Memorial Award in International Journalism for her reporting on the war in Northern Uganda and an Emmy Award winner for her story on the impact of the rise of the global middle class in India.

The Bureau for International Reporting

Indonesia is prone to frequent natural disasters and people are often evacuated to crowded shelters without pandemic protocols.

The cleanup is underway from a 7.3-magnitude earthquake off Japan's eastern coast. The tremor came nearly 10 years after a huge quake that sparked a tsunami and nuclear meltdown.