Cabdrivers have blocked roads in Paris and across the country to protest harsh conditions and unfair competition. Teachers and civil servants joined the walkout in a blow to France's Socialist government. 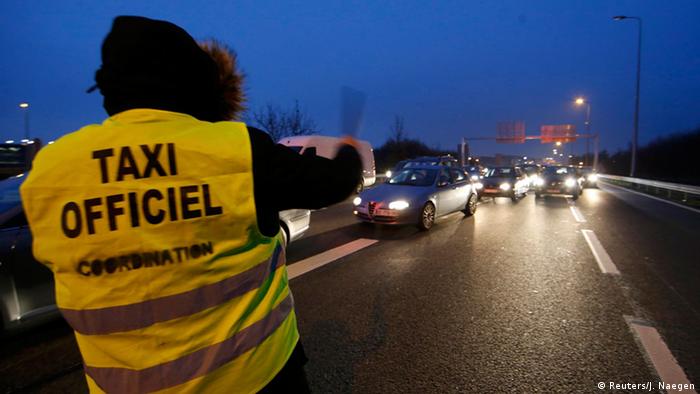 On Tuesday, nationwide strikes in France saw police pushing back crowds of striking workers and roads blocked across Paris. After taxi drivers lit a bonfire on a major highway, air traffic controllers also walked off the job, forcing one in five flights at the capital's Orly airport to be canceled.

The major force behind the strike was the cabdrivers, with around 1,200 protesting deteriorating working conditions and what they see as unfair competition from services such as Uber. Hundreds of French taxis, as well as a few from Belgium and Spain, obstructed a huge intersection leading to the western part of Paris, and a similar attempt to block an eight-lane bypass was beaten back when police released tear gas.

"Today our survival is at stake," said Ibrahima Sylla, spokesman for the Taxis de France union. "We are fed up of meetings and negotiations."

Police reported that they had arrested 19 cabdrivers in the tumult.

According to Rachid Boudjema, the president of Marseille's taxi drivers collective, Uber workers "vandalize professionals who are paying taxes, who respect the rules." While his own city's drivers were staging a strike similar to the one in Paris, Boudjema called Uber drivers "American cowboys" who "want to destroy our system - the system we are all attached to."

Uber responded with a message to customers that accused the protesters of trying "to put pressure on the government to ... limit competition" and increase costs to the passengers.

The ride-sharing app has gone through a series of legal challenges in France, sparking protests similar to Tuesday's. Despite a ban on Uber in Paris, taxi operators argue that demand has shrunk by 20-30 percent.

Alongside the taxi drivers, many of France's 5.6 million civil servants, as well as teachers, walked out of work on Tuesday. The demonstration was meant to call attention to ongoing disputes over pay, the working environment and reforms to the education system that make career advancement more difficult.

President Francois Hollande was not in France to bear witness to the workers' ire on Tuesday, as he was in the middle of a trip to India, but he has seen strings of protests during his time in office as his Socialist government has seen the economy emerge from the global financial meltdown in fits and starts.