A tanker carrying thousands of tons of acid has capsized in the Rhine River, which runs through Germany from Switzerland to the North Sea. Two crew members are missing, with rescue efforts underway. 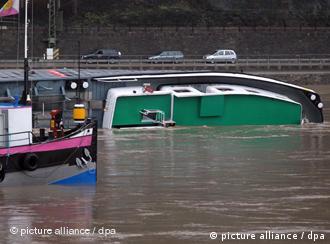 There is little hope for the two missing crew members

A tanker carrying at least 2,200 tons of sulfuric acid has capsized in the Rhine River in Germany's western Rhineland-Palatinate state.

The 110-meter-long "Waldhof" is currently stranded near the town of St. Goarshausen, home to the well-known Lorelei rock, which marks the narrowest part of the Rhine.

This tapering creates a stronger-than-usual current, and has caused many boat accidents there over the years.

A spokesman for the state water police said two of the ship's four crewmembers had been rescued, and that helicopter search efforts were continuing for the remaining two.

"The search so far has not been successful but authorities continue their intensive efforts," he said. With water temperatures at four degrees Celsius (39 degrees Fahrenheit) there is little hope for the two to survive for long.

No danger to the Rhine

According to preliminary indications, the vessel's tanks seemed to be intact, with damage to the acid containers. As the vessel is double-hulled, authorities said there was a good chance the acid would not leak into the river.

Sulfuric acid, when mixed with water, can become highly corrosive. Police experts however cautioned that even a leakage would do only very limited harm as the high tide and fast current would quickly dilute the acid. Major damage is only expected in the unlikely case the ship would break apart.

The "Waldhof" was on its way from Ludwigshafen to Antwerp.

Shipping along the Rhine, among the most important waterways in Germany and Europe, has been temporarily halted between the towns of Bingen and Bad Salzig for the duration of the rescue efforts.

Flooding was expected to continue plaguing parts of Germany on Monday after unseasonal warm weather melted ice and caused several rivers to breach their banks. (10.01.2011)

Passenger boat capsizes near Amsterdam after collision with freight ship

Dutch police said a collision between a freight ship and a passenger boat near Amsterdam capsized the ferry and may have thrown the captain overboard. Emergency services were searching the water for victims. (22.10.2010)