Taking on the Big Guys

A biting political satire, "Bye Bye Berlusconi" has made quite a splash at the Berlin Film Festival. DW-WORLD interviewed its director, Jan Henrik Stahlberg, and scriptwriter, Lucia Chiarla. 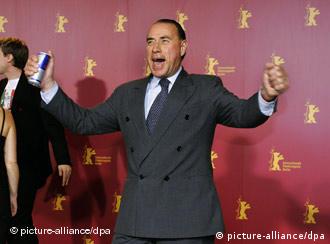 DW-WORLD: You've made a film about the kidnapping of Silvio Berlusconi. It's in Italian, it was shot in Italy, features Italian actors and an extremely convincing Berlusconi double. But you still don't have an Italian release. Don't Italians like the movie?

Jan Henrik Stahlberg: The problem is not that they don't like it. Whenever we've talked to people who have refused the film, they tend to say: I'm sorry, but I wouldn't make any money from this film because selling it to television stations is out of the question -- and moreover, I have a family. I'm not saying that anyone who won't take the movie is cowardly. The movie is very quirky, very anarchic, and dares to treat Berlusconi the way we think he deserves to be treated -- in a movie, admittedly. In real life I wouldn't want to kidnap Berlusconi. But that kind of hard-line approach can be very unsettling. I can understand why people think it's scandalous. I might not agree with that analysis, but the movie definitely is a double-edged sword. It's hilariously funny but it's also dead serious. 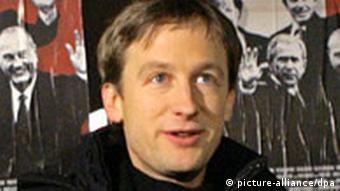 Your guerrilla-style promotion of the film has gotten attention, mainly because of the uncannily convincing Berlusconi look-alike, whom you even dispatched to a meeting with Angela Merkel.

Stahlberg: Thanks to the reactions we've had here at the film festival, we've finally managed to hook up with some distributors. We've made the contacts, so if everything happens on schedule, we should get a theatrical release before the Italian elections on April 9. If it really happens, it will be like Christmas and Easter all in one. We'd almost given up hope.

How did people react at the premiere?

Lucia Chiarla: Very positively. I was very glad to see that the audience understood that the subjects of censorship and media manipulation are not purely Italian problems.

Mr. Stahlberg, what did you mean when you said the film was the result of creative legal work?

Stahlberg: When we first came up with the idea of kidnapping Berlusconiwe got really excited, drank lots of wine and hammered out a few ideas on the computer the next day, which we sent to my lawyer. He faxed us back to say it was legally impossible. We couldn't believe it. We thought the idea was inspired -- a movie with heroes who are really anti-heroes, because kidnappings are always desperate measures, but at the same time, the heroes are likeable because they're doing something that we, as passive members of the audience, would also like to do. So we ended up drinking lots of wine with our lawyer, and reached the conclusion that either Berlusconi would have to give his permission, or we would have to do it in such a way that he didn't realize it was all about him. We worked together with the lawyer very closely. Finally, the lawyer even ended up cutting out certain scenes in the editing suite. No one could promise that I'd win if I was taken to court, but we would have a legal defense. 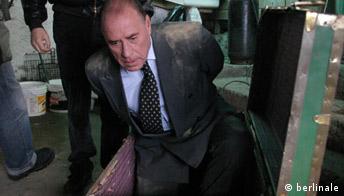 A scene from "Bye Bye Berlusconi"

Did the lawyers provide any artistic input?

Stahlberg: They had artistic input insofar as the film gained a quirkier aspect. To begin with, it's just good entertainment, and the audience soon warms up to the clichés about what an idiot, what a clown Berlusconi is. But then we suddenly show that Berlusconi really needs to be taken very seriously. The worst thing you can do is underestimate him. Hopefully, he'll be history after April 9.

Fact and fiction are often blurred in the film. The camera team, for example, is prevented from shooting and ends up fearing for their lives. Did you have the same fears in real life? 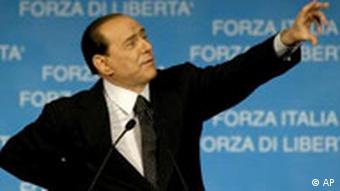 Will the real Berlusconi please stand up

Stahlberg: As a father of two, that was the second question I asked my lawyer. What does the mob do when you annoy them? And he said they won't do anything, so long as you don't annoy them too much. The mafia wants to keep a low profile. So long as you don't come up with new information that might get them hot under the collar then you don't need to fear for your life … There's always the possibility of going to court and claiming compensation. If it comes to that, then I'd be financially ruined and I'd have to go begging. My lawyer says our chance of winning a case would be 60:40, and I hope he's a better lawyer than the one in the film -- because he's a loser.

Ms Chiarla, in the film you describe yourself as a Berlusconi exile in Berlin. Is that true?

Chiarla: It's true. I can't watch Italian television anymore because as a woman, I feel completely debased. And as an Italian citizen, I don't feel represented by a Prime Minister who has seventeen court cases against him pending. And as an artist, there's ever less work available because Berlusconi cut the culture budget by 40 percent. Most movies are financed by Berlusconi and at the moment, there's just no place for me there. Perhaps that will change after April 9.

As one of Germany's biggest media mergers seems set for failure, experts are calling for a review of the country's antitrust control boards, which have so far failed to adjust to a globalized media landscape, they say. (Jan. 16, 2006)

The head of Italy's RAI state-backed television network resigned on Tuesday, saying Prime Minister Silvio Berlusconi's government was exerting too much pressure on the broadcaster.´(May 5, 2004)