Nested high on Jebel Akrad’s mountain range, the town of Salma used to be known for its spectacular view. Syrians from the coast, many of them Alawites, came to this Sunni retreat for fresh air in the summertime. 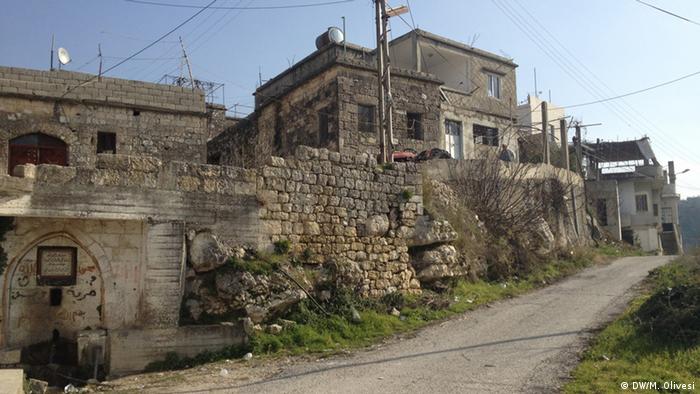 Brand-new residences for tourists now feature gaping holes and twisted cables. Others are occupied by Free Syrian Army rebel fighters. Trash, debris and shrapnel litter the empty streets. Only a few hundred civilians still live in Salma, and they rarely venture out of their homes.

"Salma is on the frontline," explains Doctor Rami Habib, who works at Salma's small field hospital. "It's being targeted day and night, everyday. If you just look to the other side of the valley, you'll see the regime's tanks shelling on Salma."

Doctor Habib says the Syrian army has recently scaled up its pounding and started dumping barrels of TNT.

FSA fighters drive us down a ravine to the point of impact of one such explosive, they say. The bomb landed earlier that morning between the road and a river, carving out a large crater. The strong wind deviated it by a few meters from its likely target: the road itslef. Cutting it off would isolate two opposition-held areas in this strategic and symbolic stronghold of the Assad regime.

Latakia province's border crossing with Turkey is the only one still in the hands of the government in Syria's north. The coastal region also stands as the heartland of Alawites, and a power base of the Assad family. Many Syrians believe Alawites, including the Syrian President who was born in a village nearby Latakia city, plan to retreat here if they lose control of Damascus.

But across Latakia's hinterland, Alawites are abandoning their villages as rebels push their way deeper inside.

Build on a hill's slope, the village of Kurt used to be half Alawite, half Sunni - a religious diversity unusual in the rest of the country where small communities tend to be predominantly Sunni, Alawite, Druze or Christian.

Mohamed Abul Abed, a 30-year-old Sunni, grew up with Alawite friends. Like any other neighbors, he says they would routinely visit each other, share tea and play ball.

But Mohamed says his friends grew apart as the revolution unfolded. "They told me they were afraid they'd be persecuted if the regime falls," Mohamed says. "I told them no. We are against the regime, not against Alawites. But whatever I said, they were convinced their fate was tied to that of the regime. Because that's what the Assads have put in their mind." 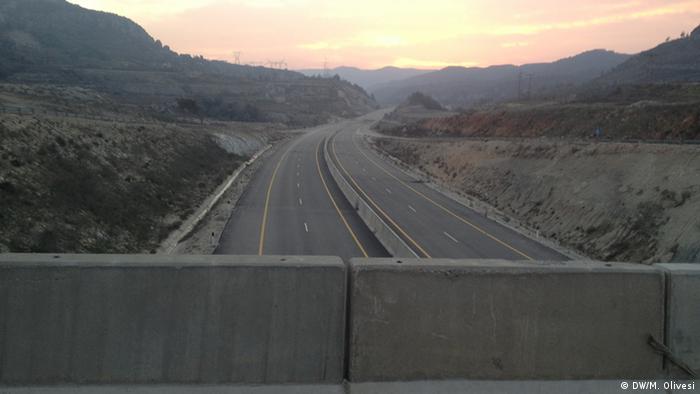 The Road to Latakia City: The coastal town is a stronghold of the Assad regime

When the Free Syrian Army took control of Kurt last spring, Alawites stayed put at first and life went on. Then weeks later, a resident spotted a group of young Alawites from the village manning a government checkpoint far from Kurt. Neighbors accused them of working as "Shabihas," the name for the regime's militiamen.

Mohamed says he can't imagine his childhood friends doing any harm. "I think they didn't kill anyone..." He pauses. "I hope they didn't."

Even so, Mohamed blames them for enabling the regime to turn the revolution into a civil war. And he says he'll probably never forgive them.

Alawite families left Kurt shortly after the checkpoint incident and moved to Latakia city, some 45 kilometers away. The coastal town is under control of the regime, but sectarian tensions are building there as well.

Sami Najib Bakri had a management job at the state electricity company. He says resentment is growing among Sunni workers who are routinely ordered to cut power in their own neighborhood.

Two months ago, Bakri was given another odd assignment: He says the military asked him to break the staff into groups of 6: 2 Sunnis and 4 Alawites. Everyone received a weapon, and the order to shoot in case of disruption.

Bakri, who defected a month later, says these units are meant to be ad-hoc militias designed for Alawites to keep in check Sunni employees. 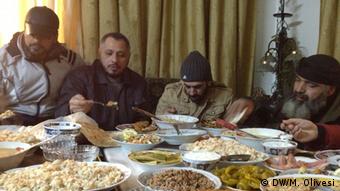 Sitting next to Bakri, his mother listens quietly while stoking her granddaughter's hair. Montaha has made a name for herself in the rebel-held territory by turning her house nearby Salma into a canteen for the FSA.

"These are my sons," Montaha says. "I'll do anything I can to help them."

In return, she hopes these fighters will take her back to Latakia, her hometown, and to her normal life. And that includes her Alawites' neighbors, she says... Those who don't have blood on their hands.

Nobel Peace Prize Winner Martti Ahtisaari blames the lack of progress in Syria on the divided UN Security Council. He tells DW that he sees elections - not an interim government - as the best option. (05.02.2013)

Displaced in Syria and looking for solace

Forced to flee from her Aleppo home, a young woman takes refuge in a rebel-held town in northwestern Syria. In a camp for displaced people, she finds a way to do her part for her country without resorting to violence. (30.01.2013)