Opponents of Syria's Bashar Assad have announced a unity agreement following protracted talks in Qatar. The deal comes as violence continues to rage on the ground in Syria. 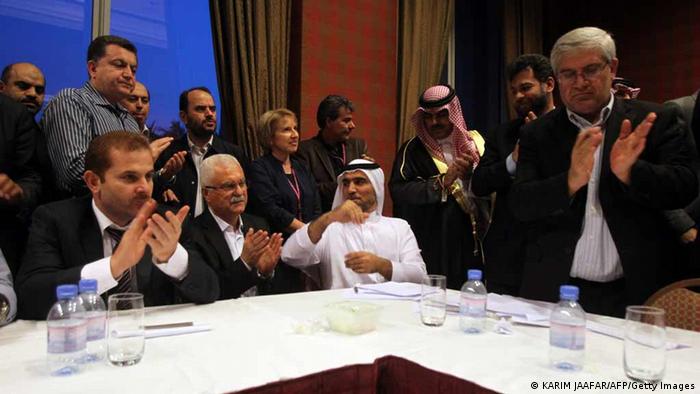 Syrian opposition groups have signed a unity agreement to create a new coalition against Assad, a delegate announced on Sunday.

"We initialed an agreement ... to form a national coalition of opposition forces," high-profile dissident Sadr Iddine al-Bayanouni said following drawn-out talks between opposition forces in Doha, the capital of Qatar.

The new coalition is to be made up of groups operating both inside and outside the country. It will be called the National Coalition for Opposition Forces and the Syrian Revolution, the delegate added.

The development came as reports trickled through of Syrian helicopters and artillery bombarding an area close to the Turkish border. Rebels from the Free Syrian Army had seized the territory, called Ras al-Ain, the day before, according to the opposition.

Meanwhile, Israel confirmed on Sunday that it has fired "warning shots" into Syria after stray mortar fire from a battle between the rebels and government forces landed in the Golan Heights near the border with Syria. Israeli public radio said it was the first time Israel had fired on Syria since the 1973 war.

The violence in Syria on Sunday follows Saturday's bloodbath, which left 121 people dead, including 11 persons in the southern Syria town of Daraa.