Syrian civil society survives amid the rubble | Middle East | News and analysis of events in the Arab world | DW | 06.09.2016

Syrian activists have been undeterred by war, keeping hospitals running, kids in school and bread on tables. The conflict may have even made them stronger in some ways. Mat Nashed reports from Gaziantep, Turkey. 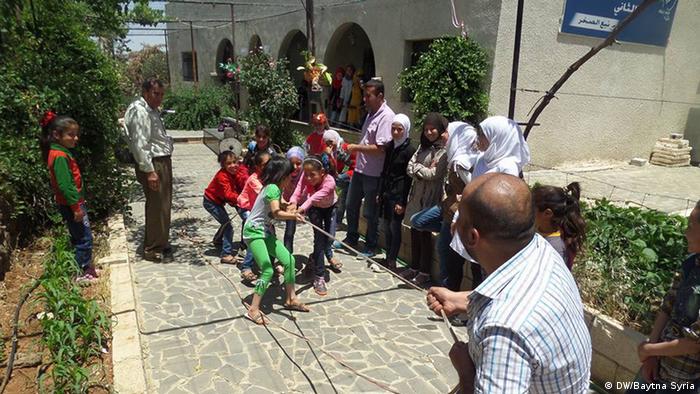 Beneath the rubble and burning buildings of Syria's civil war exists a small women's center in the Al-Mashhad neighborhood of Aleppo. Last July, the grounds above the center were barrel bombed three times. Bashar Assad's regime has repeatedly used these bombs indiscriminately, and discriminately, to level infrastructure and kill thousands of civilians.

The center, located just far enough away, was partially damaged. That didn't stop the women who went to the center; each time they returned the following day.

"We don't understand why [the regime] wanted to bomb our center and kill us," said Bakri Kaakeh, the CEO of Silkroad, a local civil society group that administers the center.

Silkroad is one of many local civil society groups that have established initiatives to promote democracy in opposition-controlled parts of the country. Those who work in these organizations put their lives on the line. They have crossed in and out of Syria to administer schools, youth centers, hospitals, bakeries and vocational centers, all of which have been systematically targeted by regime forces and extremist groups in the country.

After Syria's Baath Party assumed power in 1963, the government set up state-funded associations while barring the establishment of any independent organizations. Syrian activists continue to be arrested, tortured and murdered today. Yet due to their perseverance, civil society may have expanded more during five years of conflict than it did in almost five decades under Baathist rule.

One lifeline for many civil society groups is an organization called Baytna Syria - "Syria, our home" - which aims to build a community of active citizens while financing an array of community projects in opposition-controlled areas.

Assaad Al Achi, executive director of Baytna Syria, noted that though they've been successful in empowering communities amid the war, determining which initiatives to support remains a struggle.

"The fact that we're working remotely and not in the country is the undercurrent to all of our challenges. We can't really see projects materializing on the ground, so trying to measure the impact of projects without seeing them becomes extremely tough," he told DW. 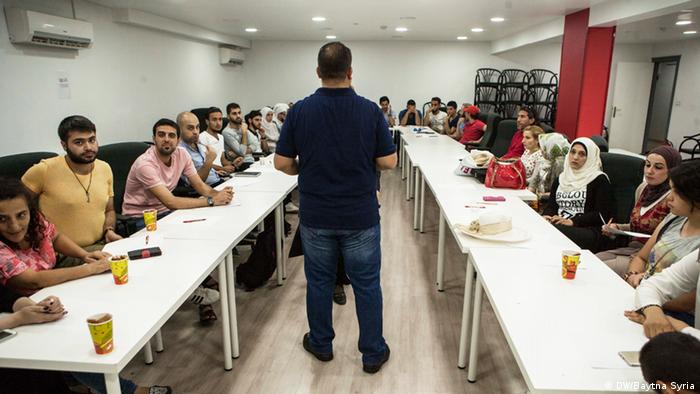 The greatest challenge is, of course, the war itself, in which civilians remain unprotected.

During the early stages of the uprising against Assad's regime, demonstrations were repressed and activists were often hunted and executed. Many others were killed by barrel bombs and regime snipers along with the very people they were trying to help. The "Islamic State" group, which didn't announce its presence in Syria until April 2013, has executed numerous media activists and dissenters.

Other opposition groups in the north of Syria have coerced, restricted and even threatened activists in the area. Achi recalled a time when Baytna Syria had to cancel a project to finance a youth center in Idlib after Jabhat Fateh al Sham - previously known as al-Nusra Front - threatened to kill the man who was supposed to oversee the center when it opened. The setback was a reminder of how fear and violence shape all aspects of life in Syria today.

"We only had four incidents out of the 84 projects we've supported in 15 months. Overall I think we been pretty successful in evading risks," said Achi. "Part of it is risk management, but part of it is luck as well. When the regime is dropping a barrel bomb, it's either a hit or miss."

Many activists, however, haven't been as lucky. Razan Zeiytouneh, a human rights lawyer who ran the Violations Documentation Center, a network that monitored the deaths and violations of opposition and regime forces, was abducted along with three of her colleagues in December 2013. There has been no news of them since.

Tammam Al Jamous, one of the founding board members of Ghosun Zeiytoun - "olive branch" in English - said three people in his organization had died from indiscriminate attacks by the regime.

Ghosun Zeiytoun was first formed to create safe spaces for children while helping to keep schools running. One of their first initiatives, Al Jamous explained, was to send teachers basic necessities to allow them to keep working since the conflict prevented them from retrieving their salaries. The group has also provided children with language and software classes as well as first-aid training. 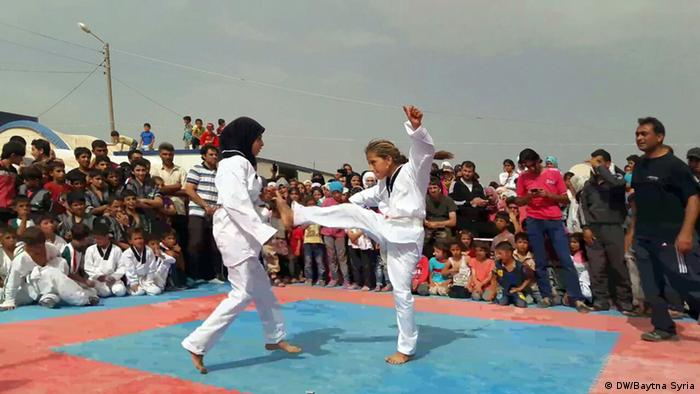 "We want freedom for Syria and we want a democracy," he said. "The partnership we have with Baytna Syria has been one of the most successful we've ever had. They are Syrian [so unlike some international donors] they know the exact situation in the country and the risks."

"I once told a worker from an international aid agency that the people of Syria have no more bread," said Dima Mohamad, a protection officer for Ghosun Zeiytoun. "She just looked at me and said, 'That's okay. The people can eat cake instead.'"

Four months ago, a youth center run by Ghosun Zeiytoun in Deraa district was hit by an air strike, destroying a courtyard where students often gathered for class. Though there were no casualties, the attack was a vivid reminder of the danger they face.

Activists who first mobilized to coordinate demonstrations have managed to build small institutions, helping bring a semblance of normalcy to life in parts of the beleaguered country. Their defiance alone has put them on at least one hit list.

"Any action we carried out without the regime's permission means we're terrorists [in their eyes], Al Jamous said. "But we won't stop. We are promoting a language of peace. "We promised our friends [who died] that we would continue their work for them."

Still stricken by grief, Abdullah Kurdi has said politicians have done too little to stop both the war in Syria and deaths of migrants at sea. The 41-year-old lost his wife and two children, including 3-year-old Aylan. (01.09.2016)

The situation in Aleppo appears increasingly hopeless. This civil war is on the brink of its greatest humanitarian disaster. But there's not much the West can do on its own, writes DW's Loay Mudhoon. (15.08.2016)

The World Food Programme's Jane Howard discusses food deprivation with DW. She considers the impact on international law, aid agencies, and the short- and long-term effects on survivors of a siege. (12.06.2016)

Belarus Olympic sprinter says world's support has made her 'stronger'