State media has reported a series of strikes on government targets in northern Syria but has not said who was responsible. The report comes weeks after the US, UK and France launched strikes against military bases. 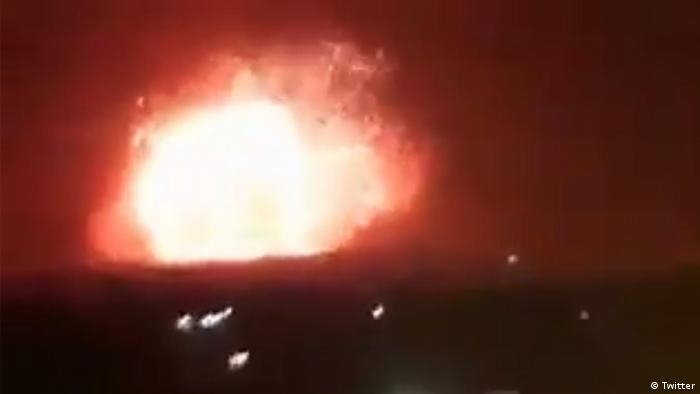 An unverified screenshot from Twitter showed the reported explosion

SANA, Syria's state-run news agency, said the strikes hit bases in Hama and Aleppo provinces overnight. The Syrian Observatory for Human Rights, a UK-based war monitor, confirmed the attacks and said at least 26 pro-government fighters, most of them Iranians, had been killed in Hama. It said four Syrians were also killed.

Observatory head Rami Abdel Rahman said the Hama strike targeted a depot for surface-to-surface missiles at a base known as Brigade 47. "Given the nature of the target, it is likely to have been an Israeli strike," he said.

Israel's Intelligence Minister Israel Katz did not comment on the strikes, but said only that Israel "has made it unequivocally clear at all levels that it will not allow an Iranian front in Syria to be established."

The Syrian government-owned Tishrin newspaper quoted what it called "sources on the ground" as saying that the missiles were fired from American-British bases in north Jordan.

The strikes came hours after Israeli Prime Minister Benjamin Netanyahu talked to US President Donald Trump on the phone amid rising tensions between regional foes Iran and Israel.

Iran's Supreme Leader Ayatollah Ali Khamenei on Monday said the time when Iran's enemies can "hit and run" is over. He did not specifically refer to the latest attack in Syria.

"They know if they enter military conflict with Iran, they will be hit multiple times," he said.

Israeli Defense Minister Avigdor Lieberman had vowed on Sunday to maintain the right to strike targets in Syria.

"We have no intention to attack Russia or to interfere in domestic Syrian issues," Lieberman said at a conference, according to the Israeli daily newspaper Haaretz.

"But if somebody thinks that it is possible to launch missiles or to attack Israel or even our aircraft, no doubt we will respond and we will respond very forcefully," Lieberman said, adding Israel had three problems: "Iran, Iran, Iran."

"Iran is trying to destabilize the whole region, not only in Israel," he said. "Look at what is happening in Yemen, Lebanon, Iraq, Syria."

Syrian state media reported on similar airstrikes on government bases in the Homs region and on the outskirts of Damascus in mid-April. The military later said no attack had taken place; a false alarm had set off air defense systems.

The false report came days after the United States, France and the United Kingdom launched airstrikes against Syrian government targets in response to an alleged chemical weapons attack near Damascus.

At the beginning of April, an airstrike against the government's T4 military air base in Homs killed at least seven Syrians and seven Iranians. Syria and Iran, a close ally, accused Israel of carrying out the attack. Israel has not confirmed or denied responsibility.

To date, Syrian government forces have largely stayed west of the Euphrates River, but rare clashes have changed that. Last time this happened Syrian forces faced a violent US counterattack. (29.04.2018)