Kurdish rebels in Syria say they have seized a closed crossing on the frontier to northern Iraq by expelling al Qaeda militiamen. And the toll from a car bombing Friday outside a mosque near Damascus has risen to 40. 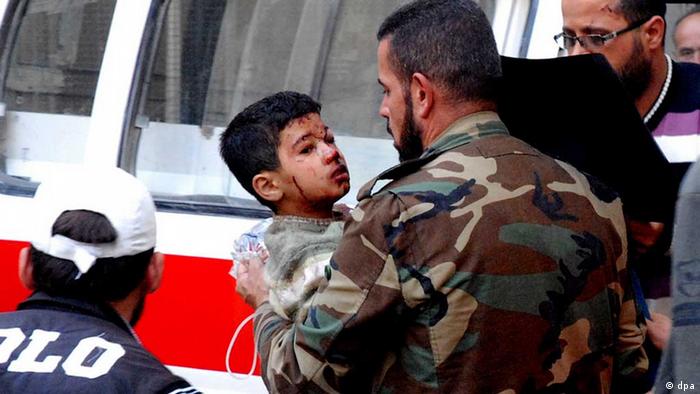 Kurdish rebels involved in Syria's complex civil war said Saturday they had seized Syria's northeastern Yaroubiya border crossing after three days of fighting. Since March, it had been held by an al Qaeda-linked group.

The group, known as the Islamic State of Iraq and the Levant, had previously seized the crossing from Syria's army.

The Britain-based Syrian Observatory for Human Rights announced that the capture of the al-Yaroubiyeh post would lead to a direct supply line from Iraq's northern semiautonomous Kurdish region.

A spokesman for the Kurdish group YPG told the news agency Reuters that Kurdish areas in Syria were blocked by Islamist groups on one side and Turkish forces on the other.

It was "too soon" to talk about opening the crossing into Iraq's Kurdish area, he added.

On Saturday, the Observatory also reported that the toll from Friday's car bombing (pictured) outside a mosque in the rebel-held town of Suq Wadi Barada had risen to 40, including seven children.

Jihad and back: German fighters in Syria

Some 200 German Islamists are thought to be fighting in Syria. Many are worried they could be a threat when they return home. More likely, however, they will return to Germany disillusioned. (22.10.2013)

The state news agency, SANA, reported however that the car had detonated while "terrorists were packing it with explosives."

Suq Wadi Barada is under rebel control but ringed by troops loyal to Assad.

On Friday, UN humanitarian chief Valerie Amos told the 15-nation Security Council that words could not really paint a picture of the "grim and gruesome reality of Syria today."

A UN-commissioned report found that since it began in March 2011 the civil war had thrust more than half of Syria's population into poverty and warned that the economic devastation could last for years.

UN agencies announced that they were racing to vaccinate children against numerous diseases amid fears of a polio outbreak.

Syria's fractured opposition has yet to decide whether to attend the so-called Geneva II conference proposed for next month.

Damascus has dismissed the opposition demand that Assad step down as part of any political settlement.