Sylt: In Winter, a Mellower Pleasure

Winter on the popular beach resort of Sylt means icy grey waters under a dark sky, bracing sea air, heavy surf -- and above all, more calm than in summer. 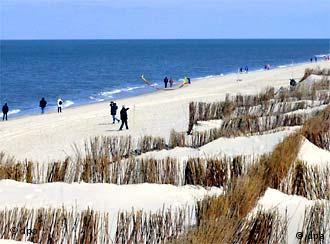 A beach vacation in the winter? Why not!

For Germans, Sylt is synonymous with chic. In summer, the expensive, exclusive beach resort is a playground for the rich and famous, where getting away from it all combines nicely with seeing and being seen.

In the winter, however, life on Sylt is another story altogether. In the off-season, the largest of the North Sea islands, which lies off the coast of Germany at the Danish border, all but empties out, leaving raw nature behind. Sylt in winter is a meditative and healthy oasis -- for those who think to take advantage of it. 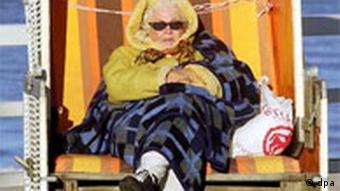 Sylt used to be more of a hot spot for celebrities

Winter visitors to Sylt won't find themselves entirely alone, however. First off, there are the health-spa visitors. The bracing sea air -- rich in iodine -- is considered helpful against numerous ailments from heart disease to skin irritations, and doctors prescribe trips to health spas on Sylt in winter and summer alike.

In addition to the spa-goers, there are second-home owners, people on winter holidays, and, of course, day trippers.

Many of the day trippers come from Denmark, and indeed it was a Dane who, legend has it, was the first to bathe on the island. In 1842, Denmark’s King Christian VIII notoriously stripped down to swim in the waters of the Westerland beach, which had yet to become a popular resort.

In fact, at the time, there was neither a restaurant nor a hotel on the island. But in 1855, a nobleman named von Levetzow built wooden bathing cabanas in Westerland, now the island's capital. Thus, tourism was born on Sylt.

The island is Germany’s northernmost outpost. It is the largest island of the Fresian archipelago, which stretches from Denmark to the Netherlands. Today, the island has seven townships and twelve towns, with a total of 21,500 inhabitants and some 12,500 second-home owners.

There are 50,000 beds on the island, mostly in holiday apartments. Every year, the island is visited by 600,000 tourists, who, altogether, stay for more than five million nights. 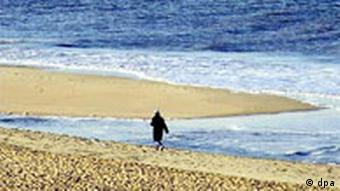 In the winter, you won't have to fight the crowds

For over a century, Fresians have been known for their thatched roofs, and the hamlet of Kampen has its share. But in contrast to the town's quaint looks, it became known in the 1960s and 70s for its high concentration of prominent visitors, including media stars, artists and intellectuals. For a decade or two, the island had a reputation for decadence -- it was often called the "home of the rich and the naked" -- but the social extravagance has calmed down in recent years.

Westerland is the largest town on the island, with some 9,000 inhabitants. It has 19,000 guest beds, a promenade, a health spa, casino, and several less-than-attractive apartment blocks: The lovely old villas and traditional Fresian homes were torn down in the 1950s and 1960s.

Home of the sea captains

No one can dispute the fact that the town of Keitum is the loveliest hamlet on the island. The many original thatch-roofed houses are surrounded by a rich variety of trees: Elm, ash, oak, birch, chestnut. The Local History Museum offers a pleasant viewing of the nature and history of the island.

At its beginnings, Keitum was the home of the sea captains who travelled the world on massive expeditions, which often made them rich. In turn they built fancy homes, and the "Altfriesische Haus," or Old Fresian House, is a living museum that shows how life was lived on Sylt in the 18th century.

Also worth a visit is the 13th century, late-Roman church St. Severin. The door handles are shaped like whales, and a romantic baptismal font, a Renaissance pulpit and a carved altar from the late Gothic period are also worth a look.

If you are really seeking quiet, the agricultural hamlet of Archsum is worth looking into. It has the Island's oldest church, with a baptismal font dating from the 13th century. Rantum, with its many thatched houses, is the island's smallest town.

One of the joys of the winter visit is to walk along the water, enjoying the stiff ocean winds and the salty spray on the skin. But even nicer yet is getting out of the cold. Part of the art of warming up on Sylt is enjoying a hot cup of tea.

Unlike in the rest of Germany, where coffee is the drink of choice, the Fresians -- who have long enjoyed both trading and cultural kinship with the British -- opt for a steaming cup of tea. Typically, this is drunk with candied sugar and milk that is poured in, but never stirred.

Windy Energy in the Sea

Germany is the world’s leading producer of wind power. But as land sites for wind parks become increasingly scarce, the future of the country’s wind industry lies on the open sea. (18.08.2004)

Germans Encouraged to Holiday at Home for Environment's Sake

An intense debate has begun in Germany on the kind of lifestyle changes needed to cut greenhouse gas emissions, days before EU leaders hold a summit on energy and climate change. Holidaying at home is one suggestion. (05.03.2007)

As the Deutsche Bahn struggles with negative headlines, French-owned Connex muscles in on as much of the German rail giant's turf as possible. (29.09.2003)

More on the island in English.