The Swiss government has unveiled proposals to tighten the country's laws on assisted suicide in an effort to limit what has become known as "suicide tourism." The country remains deeply divided over the issue. 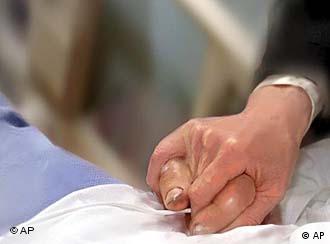 The government has put forward two proposals to address the matter - the first would see assisted suicide banned altogether, while the second, and most likely to be approved, would limit the practice to the terminally ill.

Swiss Justice Minister Eveline Widmer Schlumpf argued in favor of an individual's right to choose the moment of their death.

"We don't want a total ban," she said, "but we do want to limit the current practice. We don't want to be a country with a reputation for suicide tourism."

She said that in order for an assisted suicide organization to avoid prosecution it would have to require that a patient obtained testimony from two doctors, and had expressed a wish to die over a long period of time.

Schlumpf ruled out the practice of foreigners arriving in Switzerland and dying within days.

In recent years, dozens of people have travelled to Switzerland to use the services of Dignitas, a leading assisted suicide organization in the Alpine nation. Many came from Germany and Britain, where assisted suicide remains illegal.

Dignitas has now come under scrutiny in Switzerland because of its policy of assisting those who are not terminally ill, and for the alleged speed with which the organization deals with its patients. Dignitas treats primarily foreign patients who typically arrive in Switzerland, see one Dignitas doctor and then die within hours.

The proposal that assisted suicide should be limited only to the terminally ill has angered another organization, Exit, whose president, Hans Wehrli, said that denying assisted suicide to the chronically ill would be going too far.

"A third of our patients are not terminally ill, but they are really suffering, and they want to die," he said. "The government has put them in the position where they would have to shoot themselves or jump in front of a train.

"The government says these proposals safeguard dignity in death and the right to choose, but they don't. This isn't dignity, it's cruelty," Wehrli added.

Both proposals are now open for public debate before going to Switzerland's parliament next March. Exit and Dignitas have said they would, if necessary, push for a nationwide vote on the issue of exactly how far the limits on assisted suicide should go.

German police have issued a temporary restraining order against controversial euthanasia advocate Roger Kusch, prohibiting him from aiding any more people who want to end their own lives. (29.12.2008)

The screening of a TV documentary in the UK showing a man being assisted in ending his own life has further enflamed debate over the controversial act of assisted suicide. (11.12.2008)