The screening of a TV documentary in the UK showing a man being assisted in ending his own life has further enflamed debate over the controversial act of assisted suicide. 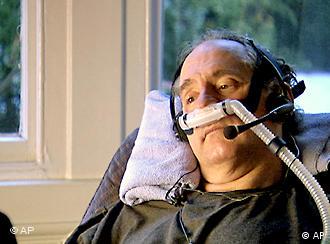 Craig Ewert said he wanted to go on, but couldn't

After the airing on SKY TV of the film, "The Right To Die?" by Canada's Oscar-winning director John Zaritsky, British Prime Minister Gordon Brown called on the media to avoid "sensationalism."

"I think it is very important that these issues are dealt with sensitively and without sensationalism and I hope broadcasters remember that they have a wider responsibility to the general public," Brown said in parliament, adding that he opposed legislation on assisted suicide, which is illegal in Britain.

"These are very difficult issues and we should all remember that at the heart of any single individual case are families and people in very difficult circumstances who have to make for themselves very difficult choices," the prime minister said..

His comments came after Sky defended the screening of the documentary in its Real Lives series. The film was aired on Wednesday, Dec. 10.

The film is a record of the assisted suicide in September, 2006, of 59-year-old Craig Ewert, a US university professor who lived in Britain, and who allowed Zaritsky to film his death.

Ewert suffered from motor-neurone disease and chose to die rather than endure the "torture" he feared from his degenerative condition.

The father-of-two is seen drinking a mixture of sedatives and turning off his own ventilator using his teeth. 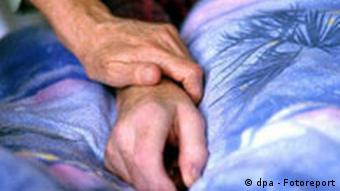 The Bundesrat has called for organized assisted suicide to be outlawed

The assisted suicide was conducted at the Dignitas clinic in Zurich. Ewert's wife Mary was by his side.

Assisted suicide has been allowed in Switzerland since the 1940s if performed by a non-physician who has no vested interest in the death.

"This is an issue that more and more people are confronting and this documentary is an informative, articulate and educated insight into the decisions some people have to make," said a spokeswoman for the Sky program.

"It's a slippery slope. The danger is that we start to believe in a story that there is such a thing as a life not worth living," said Peter Saunders, director of campaign group Care Not Killing.

John Beyer of media watchdog Mediawatch UK said: "I'm not sure whether the moment of death is something for television but the real concern is whether this is influencing the public in a way that it shouldn't be." 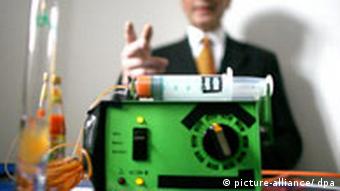 Snips of the film have made their way to online video content Web site YouTube, as well as that of German daily newspaper Bild, which gave a brief run-down of what to expect from the film.

German politicians, church leaders and social workers have been angered of late by the stance of former Hamburg justice minister and euthanasia advocate Roger Kusch.

Kusch does not involve himself in the act of assisting suicide, which is illegal in Germany. But he does advertise his services as a "suicide counsellor," providing advice and support for those seeking to die, which is not illegal.

German politicians are considering closing what they see as a legal loophole.

In the EU, the practice has been legalized in the Netherlands and Belgium, while French law regulates the "right to die," which empowers the terminally ill to refuse life-extending treatments.

According to figures released last month, between 2001 and 2004, 91 percent of those who died with help from the Swiss firm Dignitas were foreigners, mostly from Germany, France and Britain.