Swiss same-sex couples have won the right to marry after voters overwhelmingly backed its legalization in a referendum. The vote was brought about by conservative politicians opposed to LGBTQ+ marriages. 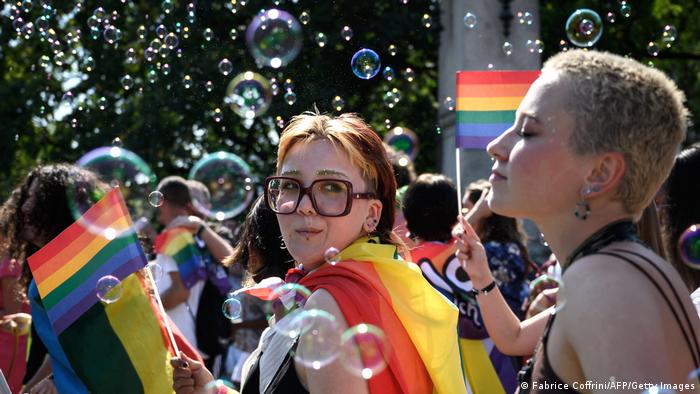 Since 2007, same-sex couples have only been able to enter into a civil partnership

Switzerland has voted by a wide margin in favor of allowing same-sex couples to get married and adopt children, in a referendum held on Sunday.

Official results show 64.1% voted "yes" to legalizing same-sex marriages, while 36% voted "no," according to initial results from the gfs.bern polling agency.

However, supporters have said it could take months before such marriages could take place, mainly because of the country's administrative and legislative procedures.

Swiss parliament backs 'marriage for all'

Ahead of the vote, the government and lawmakers had urged voters to back "marriage for all" and eliminate the current "unequal treatment" of LGBTQ+ couples.

Swiss lawmakers had voted in December to legalize same-sex marriage.

But conservative politicians opposed to the law managed to secure the required 50,000 signatures to put the issue to a referendum.

Members of some Christian congregations and the right-wing Swiss People's Party (SVP) — Switzerland's largest political party — were some of the strongest opponents of marriage equality.

Swiss Alps — in pink and red

Switzerland decriminalized homosexuality in 1942, but local and regional police forces were known to have maintained "gay registers" until the 1990s.

Since 2007, same-sex couples have only been able to enter into a civil partnership.

While about 700 such partnerships are registered each year, this does not grant the couples the same rights as marriage does, such as citizenship and joint adoption of children.

In December, lawmakers had voted to allow lesbian, gay, bisexual, transgender, queer and intersex people to marry, instead of just acquiring civil unions.

They also backed amendments to the Swiss Civil Code, replacing words such as "bride" and "groom" with either "two people" or "the engaged."

The result of the referendum, if confirmed, would allow the marriage bill to become law.

Same-sex couples will be able to jointly adopt children, and foreign spouses could become eligible to apply for citizenship through a simplified procedure.

Switzerland and the pandemic: in desperate need for tourists

The Swiss tourism industry is worried about its summer season. Tourists from overseas are sorely lacking. The country's mountain summits look deserted, and the coffers appear to be empty on our trip to Engelberg.