Swiss set to vote on whether to ban army guns in the home | Europe | News and current affairs from around the continent | DW | 11.02.2011

Swiss are up in arms over a practice that forces soldiers to keep firearms with them at home while not in service. Advocates deem it central to security, opponents call it dangerous. A referendum will decide its future. 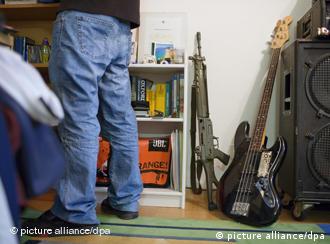 Soon army guns could be banned from Swiss bedrooms

Since World War II, Swiss military policy has dictated that soldiers returning home from service keep their guns with them as a threat to deter potential invaders.

A referendum scheduled for Sunday will decide whether that practice, long a core of the country's civil defense strategy, will remain in effect in the Swiss Federation's 26 cantons.

A people's initiative, launched by a coalition of center-left parties, NGOs and the Catholic Church, has campaigned to have all army-issued weapons stored in military arsenals to prevent the potentially deadly consequences of guns being kept in Swiss homes.

Chantal Gallade, a member of Swiss parliament, heads the campaign and has firsthand experience of those consequences.

"I was 11 when my father shot himself with his army gun. This is a reality in Switzerland, it happens a lot, and that's why I have talked openly about my experience," Gallade told Deutsche Welle.

"Since then, I have many letters and e-mails from others who have had to go through the same thing, but who never felt they could speak about it because it is such a taboo here." 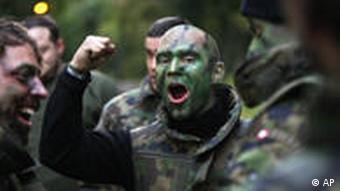 Some soldiers say Switzerland without guns is not Swiss at all

Gallade's initiative enjoys the backing of the Swiss Medical Association, which points to Switzerland's rate of gun suicide - the highest in Europe - in its support of the ban.

Association president Jacques de Haller told Deutsche Welle that the practice of keeping army weapons at home is nothing more than "dangerous nonsense."

"We have statistics that show that young men often commit suicide with the military firearm after returning home from military service. We literally have hundreds of suicides in Switzerland, which is a small country with just 7 million inhabitants. If we can prevent 60, 70, maybe 100 deaths in Switzerland every year, it's really worth it."

De Haller added that the practice - apart from being dangerous - was also outdated.

"It doesn't make any sense anymore; I mean we're not going to defend Switzerland against the Red Army from the kitchen window or the backyard," he said. 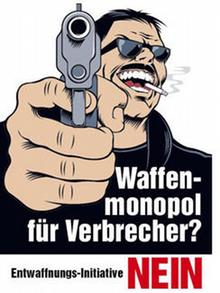 45 percent of Swiss will say NEIN

The Swiss army, however, is a national institution and anything that even suggests change is certain to stir up controversy.

In an emotional televised debate, Switzerland's Defense Minister Ueli Maurer warned that taking the guns away would undermine the military.

"The state asks from me, and all other men, that I would be prepared to lay down my life if necessary to guarantee freedom in my country. I had to swear to that when I was in the army - and all the other recruits, too," he said.

"Now the same state is saying these young men can't be trusted with their weapons. And that's the problem: If the state starts to distrust its citizens, then things will go badly wrong.

Latest opinion polls show Sunday's vote will be very close. Around 47 percent of citizens said they were in favor of the ban, with 45 percent against it.

The 8 percent still undecided will be forced to make a choice between a long, and for many, proud tradition - and a reformed Swiss army that many argue will make Swiss homes safer places.

Switzerland has approved a plan to automatically deport foreigners convicted of serious crimes. The proposal, put forth by the nationalist Swiss People’s Party, has been criticized by human rights groups. (28.11.2010)

A recent referendum in Switzerland placed a ban on minaret construction in the country. Now, a Muslim man living in Switzerland has filed a complaint with the European Court of Human Rights. (16.12.2009)

In response to a March school shooting, in which a teenager shot 15 people dead, the German cabinet has introduced amendments to Germany's gun laws, which would further restrict all gun owners in the country. (28.05.2009)