Sweden Reels From Tsunami Disaster | Europe | News and current affairs from around the continent | DW | 03.01.2005

Sweden has suffered the worst casualties among European countries in the Asian tsunami disaster. As the population mourns, the government in Stockholm has come under fire for its handling of the catastrophe. 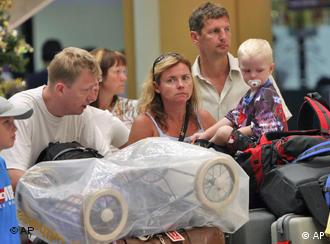 Swedish tourists in Phuket wait to take a flight back home

Instead of a spectacular fireworks display, distraught Swedes ushered in the new year with a national day of mourning and candle-lit vigils. 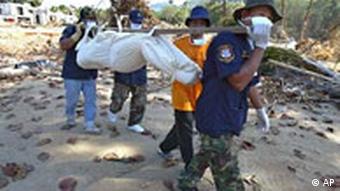 Around 20,000 Swedes were on holiday in Thailand when the Indian Ocean tsunami struck on Dec. 26, 2004. With over 1,000 feared casualties, Sweden may be the European country worst hit by the disaster.

On Sunday, Swedish State Secretary Hans Dahlgren revised downwards the figure from an initial total of 3,686 Swedes missing in the region affected by the tsunami, to 2,915. Ongoing double-checks of reports about Swedes believed missing had enabled authorities to shorten the list by over 20 percent, Dahlgren said.

The government also revised the confirmed death toll to 52 Swedes, from 59 earlier, but reiterated that it was expected to rise.

There remains little doubt that the South Asian tragedy has turned into a national trauma for the Scandinavian country of nine million. 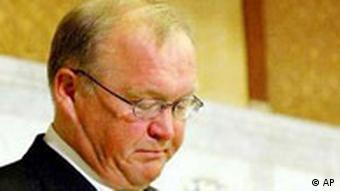 Last week Prime Minister Göran Persson attempted to brace his country, unused to such large-scale loss of lives, for the worst.

"It's a catastrophe of enormous dimensions, the worst in our times. The number of injured and dead will rise dramatically," Persson warned. "We must rally together and support each other. This will affect our lives for a long time to come."

Coffins are scheduled to begin arriving this week as many of the recovered bodies still await DNA analysis for identification. 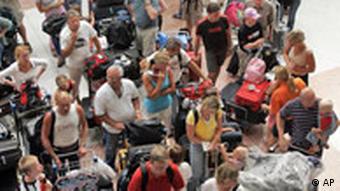 Meanwhile, hundreds of stunned and skimpily-clad Swedish holidaymakers have been arriving daily in airports around Sweden. Most of them are still in shock and traumatized as they try to come to grips with the disaster that many only narrowly survived.

One of them, Daniel Haag, who landed at Stockholm's Arlanda airport, recalled the first moments when tragedy struck.

"I woke up just as my hotel room filled with water," Haag said. "I was under water for almost a minute before I came up again. I managed to catch on to the trunk of a car that was floating in the debris and heave myself up," he said. "And then I ran for my life."

The extraordinarily high number of Swedish tourists in Thailand is blamed on the weather, with many wishing to leave the Nordic realms to escape the dark winter cold for sunnier locations.

In total, some 4,500 people from Sweden, Norway, Denmark and Finland are missing.

Search for the missing

However, the search for the missing has been hampered by the widespread destruction wrought by the tidal waves in the region.

Even as mass graves are dug in the face of fast-decomposing corpses, officials warn that all the bodies of the tourists may never be recovered because many could be washed out to sea.

On Sunday, Persson's government pushed for another search of the Andaman Sea coastline by Thai and Japanese navy vessels. 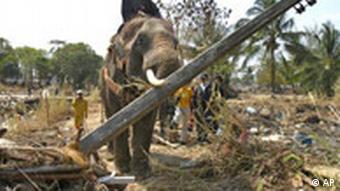 Elephants have also joined the search for bodies in the popular Khao Lak tourist paradise in Thailand, heading into debris-strewn forests with rescue teams to retrieve corpses where heavy earth-moving equipment cannot go.

Even as Sweden reels from the disaster, Prime Minister Persson and his center-left Social Democrats face scathing criticism for what many regard as failure to take prompt action following the tragedy.

Foreign Minister Laila Freivalds and Foreign Aid Minister Carin Jamtin have admitted that the government waited too long -- four full days after the disaster took place -- to send planes outfitted with doctors and medical supplies to the aid of citizens stranded in Thailand.

Eight out of ten respondents to an Internet poll of 5,289 people conducted by Swedish daily Svenska Dagbladet said the government had mismanaged the crisis.

Many have also drawn parallels to Sweden's last big tragedy 10 years ago, when 551 Swedes died as the "Estonia" ferry sank off the Baltic coast. At the time a committee investigating Swedish rescue efforts after the sinking of the Estonia recommended setting up a national disaster management system.

But, that still hasn't happened. "I would have hoped that one would have drawn lessons from the Estonia tragedy," said Kent Härstedt, a Social Democratic parliamentarian. "Actually, there should have been a commissioner for such catastrophes and an authority that coordinates everything." 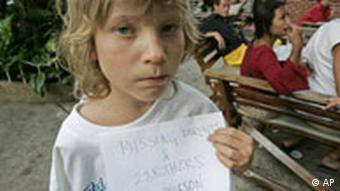 Karl Nilsson of Lulo, Sweden, poses with a sigh saying his parent and brothers are missing in Phuket, Thailand.

But Persson's government has rejected the accusations.

"We decided against a big authority for disaster management because it would only work in times of crisis and have nothing to do in normal times," Lars Danielsson, a member of Persson's cabinet said.

"Instead we're relying on existing mechanisms which are much more effective," he added. "The only drawback is that it sometimes takes a little longer until all measures are in place."

Four days after the devastating underwater quake in Asia, thousands are still searching for missing friends and relatives in the affected regions. An increasing number of Internet sites are aiding them in the hunt. (Dec. 30, 2004)

The confirmed death toll from the tsunami that hit Asian coastlines is still rising more than a week after the disaster even as a massive multinational relief operation gathers pace. (Jan. 3, 2005)