Four days after the devastating underwater quake in Asia, thousands are still searching for missing friends and relatives in the affected regions. An increasing number of Internet sites are aiding them in the hunt. 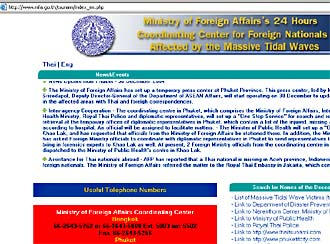 Please note: All links mentioned in this article, are found at the bottom of the page. Some of the links, particularly of the hospitals in the region, are in constant use and don't always work. Please keep trying if they don't work at the first instance.

"I'm searching for Renate and Josef K, two German tourists. If you know anything at all about them, then please contact me."

Thousands of appeals for help such as the one above on the "Phuket Disaster Forum" have now been posted on the Web sites of aid organizations and private groups. In most cases, the search is for western tourists who were in the region -- particularly in the popular holiday destinations of Phuket and Khao Lak in Thailand -- at the time of the tragedy and who still haven't contacted their family back home.

"I'm searching for my sister Cornelia, Austrian national, 39 years old, blond, blue eyes, last seen in Khao Lak." Descriptions such as these are meant to help track down the missing persons. Some of the appeals even offer links to photographs of the missing person. The "Phuket Disaster Forum" alone registered more than 1,100 missing advertisements by Wednesday. 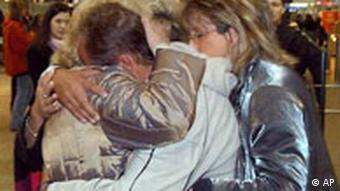 Survivors of the disaster arrive in Frankfurt

Some of them even offer information of persons safe and alive. Such as the one in the Munich-based Alexandra G. "She's returned home safely from Sri Lanka together with her friend Monika," it said.

The death toll among tourists is on the rise. On Wednesday, German Chancellor Gerhard Schröder warned that hundreds of Germans are expected to have perished in the disaster.

Officially, only 212 foreign tourists have been reported as killed by their home countries, but Thailand alone has said that at least 435 foreigners had died there. Thailand's dead tally includes 54 Swedes, 49 Germans, 43 British, 20 Americans, 18 Norwegians and 11 Italians. Tourists from Australia, Canada, Japan, Singapore, South Africa and South Korea were also among the dead.

But, relatives and friends are still hoping to find their loved ones in one of the hospitals in the region -- injured, but alive. The Phang-nga hospital in Phuket alone has published dozens of names of injured German tourists on its Web site. These in turn are posted along with the names of patients being treated in other hospitals on a common Internet page giving an overview of all the hospitals in Phuket.

Thailand at forefront of Internet Search

Not to be left out, many other travel sites have also joined in the search for missing persons. Help ads have now replaced the usual special flight offers on their sites. Most of them however offer information on Thailand. 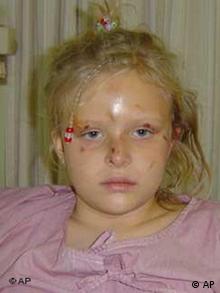 In this photo released by the Phuket International Hospital, Sophia Michl from Germany, is shown with cuts and bruises on her face. It's feared that many children may have become orphans.

The Thai foreign ministry too has put together an overview of Internet pages that are meant to aid relatives in the search for loved ones. The Thai foreign ministry site has also published lists of survivors as well as the dead. Some of the hospitals which the site links to, have published numerous photographs in the hope that it would help them to identify some of their unknown patients, including those that died.

As opposed to that, another link on the official Thai Web site offers a list of vacationers, who have left the country and are on their way home. 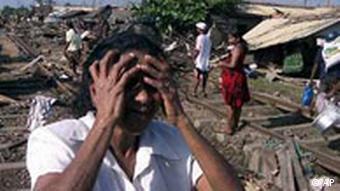 An unidentified woman cries after tidal waves destroyed her house on the coastal areas in Colombo, Sri Lanka

Sri Lanka has been slower in joining the Internet search and is still in the process of publishing an overview of the victims and survivors. The tourism authority in the country has set up an Internet site under www.contactsrilanka.org that promises to release detailed information soon.

"We can only publish general information at the moment," the vice president of the tourism authority said. "But, we hope that we'll soon release the names of all tourists to whom we have contact."

The International Red Cross has meanwhile put up a site with a nation-wide search for the missing in Sri Lanka. Survivors can register on the Red Cross Web site and can send messages to their loved ones. Those hunting for missing persons can also make a concerted online search by plugging in the names of those missing.

The Sri Lankan foreign ministry also offers links to sites on its Web site that can further help the search for victims and survivors.

The EU has pledged millions in aid for the victims of the Indian Ocean disaster. The EU's aid chief has also suggested an urgent conference for international donors to coordinate their funds to the affected nations. (Dec. 30, 2004)

International humanitarian organizations may be able to help you trace family in the regions affected by the devastating seaquake in South Asia. They're also collecting donations to stem the crisis.(Dec. 29, 2004)

Hundreds of Germans have probably died as a result of the tsunami in southern Asia, German Chancellor Gerhard Schröder said on Wednesday, describing it as the "worst catastrophe in living memory." (Dec. 29, 2004)

The website of Sri Lanka's tourism authority will help aid the search for the missing as soon as possible.

The German Foreign Ministry offers an overview of links to hospitals in the crisis regions.