It is considered an act of terrorism to criticize King Mswati III. But as Swaziland's banned opposition continues to speak out, the international community turns a blind eye. 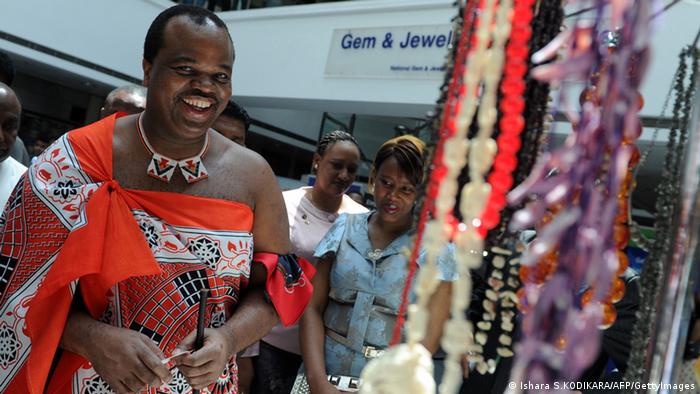 The People's United Democratic Movement (PUDEMO) is Swaziland's biggest opposition group. Yet in order to speak to its general secretary, Mlungisi Makhanya, you have dial a South African phone number. In Swaziland itself it is listed as a terrorist organization. Makhanya told DW of threats against his life and the unexplained deaths of party members. "Taking a stand against the king and fighting for the freedom of the Swazi people always come with the possibility of physical harm. But we remain committed and determined," he said. Makhanya believes, criminalizing PUDEMO is a ploy to delegitimize the voice of the Swazi people. 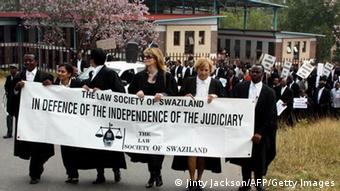 In April 2014, human rights campaigners took to the streets to protest the arrest of an editor and a human rights lawyer.

Swaziland's opposition continues to defy the ban on its activities. During Labour Day celebrations this year, PUDEMO President Mario Masuku and Maxwell Dlamini, the leader of the banned youth group Swaziland Youth Congress, were both put under arrest. Mark Beacon of the UK-based campaign group Action for Southern Africa (ACTSA), explained that the two politicians had simply spoken on behalf of their own party. "Just making that political speech on Mayday, they have been arrested and charged with terrorism, a charge that could see them face 25 years in prison," he told DW. The two opposition leaders are being kept in custody until the start of their trial in September.

In April 2014, PUDEMO General Secretary Makhanya was also arrested for wearing a party T-shirt, as a protest against the imprisonment of the journalist Bheki Makhubu and human rights lawyer, Thulani Maseko. Makhanya has been released on bail. 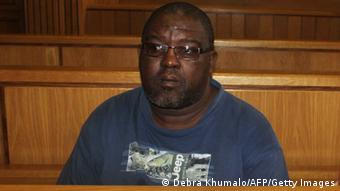 Bheki Makhubu, editor of the political "The Nation", is under arrest for criticizing the judiciary.

The strength of the monarch

Swaziland is Africa's last absolute monarchy. King Mswati III has ruled the small country with its one million inhabitants since 1986. In 1973, Mswati's father Sobhuza II banned all political parties and declared a state of emergency, which is still in place today. The king governs the country's 55 administrative divisions, known as Tikhundla, through its chiefs.

"A lot of the population in Swaziland are rural subsistent farming communities," said Christopher Vandome of the UK-based think tank Chatham House. "There is a sense of distrust for political parties and political change. There is a support of the king and also of the Tikhundla system, which was developed as a system for community involvement," Vandome told DW.

Despite Mswati's firm standing, Beacon believes that there is a growing support for the country's banned opposition parties. "People are calling for some kind of say over their lives," he says. Reforms are needed on various political fronts, as two-thirds of Swaziland's population lives on less than $1.25 (0.92 Euro) a day and unemployment stands at 40 percent. The country also has the world's highest rate of HIV, affecting more than one in four adults.

Swaziland's lack of democracy is therefore not the kingdom's biggest problem, Vandome said. Yet he believes that the economic problems are directly connected to the political system. The monarch controls more or less everything and the needs of the people are ignored. Mswati appoints some of the members of parliament and every decision which parliament takes is subject to his approval. According to PUDEMO General Secretary Makhanya, the parliament is simply a farce to meet the demands of international community. 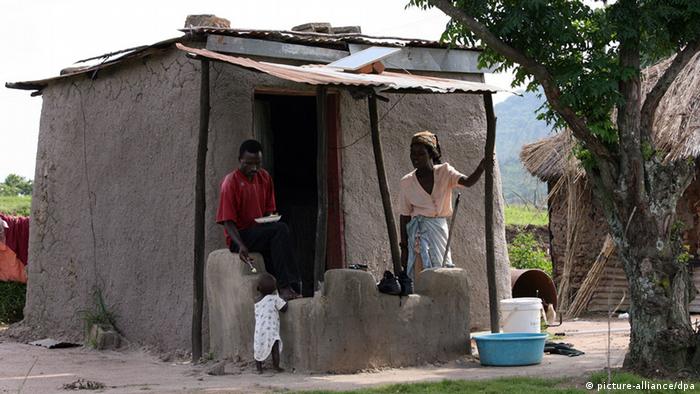 Not an international priority

For years, Swaziland has now been teetering on the brink of an economic breakdown. It has always managed to avert a total collapse, yet a US plan to bar Swaziland from the important AGOA trade agreement from 2015 would have a serious impact on the country's textile industry. The US hopes to sanction the government for its human rights abuses and its harsh anti-terrorism laws. Sugar is another commodity which could take a hit, as its Economic Partnership Agreement (EPA) with the European Union runs out at the end of this year.

Vandome is uncertain whether the United States' political pressure will have the desired effect."The crisis and the human rights abuses are not as dramatic as in some other countries on the continent," says Vandome. Swaziland has no great mineral wealth and King Mswati III has maintained a good relationship with neighboring South Africa. Countries like Zimbabwe or the Democratic Republic of Congo are internationally of much more interest, said Vandome. They have vast mineral resources.

Rights group Amnesty International on Wednesday (19.03.2014) called on authorities in Swaziland to free an editor and a human rights lawyer who were detained by the police. (19.03.2014)

EU and African leaders from 80 states are poised to meet in Brussels for a two-day summit as a deadline for tariff-free trade agreements draws near. Presidents Jacob Zuma and Robert Mugabe are staying away. (01.04.2014)