Rights group Amnesty International on Wednesday (19.03.2014) called on authorities in Swaziland to free an editor and a human rights lawyer who were detained by the police. 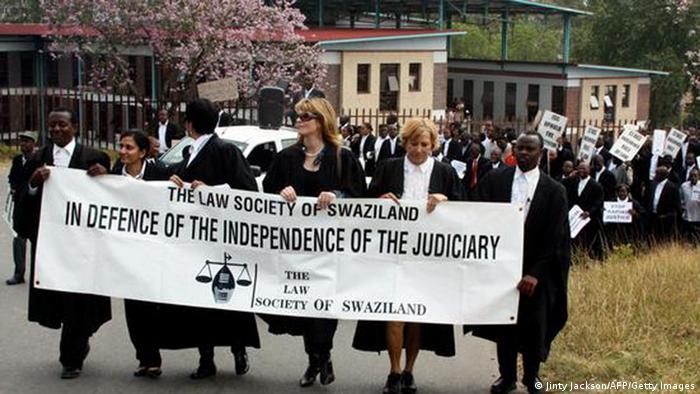 Bekhi Makhubu, editor of The Nation, and human rights lawyer Thulani Maseko were arrested on charges of contempt of court after publishing two articles. Media in Swaziland operate under strict regulations and criticism of King Mswati III and his government is not tolerated.

DW: The men were arrested after publishing articles – what exactly were these articles about?

Mary Rayner: They were two separate articles. One is the reflection by the editor of the nation and the other was an article by the human rights lawyer. Both in various ways were reflecting on specific judicial proceedings in which they presented a view that there was an interference of some sort in the judicial proceedings. The articles are part of a bigger picture of three or more years of crisis in rule of law in Swaziland in which the law society and another organizations inside and outside Swaziland have been concerned about the way in which the administration of justice is conducted and creates problems of access to the courts in a fair and impartial manner for anyone who needs to approach the courts to seek a remedy, including for human rights violations. The articles are part of that process of domestic discussion and reflection, they also followed articles that were published in The Nation several years ago which led one of the two men Bheki Aakhubu, the editor of The Nation to be arrested and to be brought before a proceeding, charged with contempt of court and he is still waiting for his appeal against a severe sentence which was imposed on him.

One of the articles was raising a comparison between the history and policies of the late president Nelson Mandela and the head of the state in Swaziland. So there was also a political dimension also in the context of commenting on the impact of the political arrangements in Swaziland which make judicial independence quite fragile.

What are the chances of them getting a fair trial?

We will have to see what happens. They will be trying next week to obtain bail and we will continue to follow the situation. There is a concern that if the matter is brought to trial as criminal contempt matter, for instance, that there many be an allocation of a judge possibly who would not approach the matter in an impartial manner. Cases are allocated as we noted in our press comment last year where Mbekhi Makhubu was convicted of contempt of court and an extremely harsh sentence imposed on him. We noted last year that cases are allocated in a manner in which it certainly creates the impression that they are not allocated in a completely impartial way in terms of who hears the matter. So there will be a concern if it comes to trial proceedings whether or not an impartial judge is hearing it or whether or not there is unwarranted pressure placed on the judge hearing the mater.

Would you say that the arrest of these two men is more like an intimidation of journalists or freedom of expression?

It certainly has an intimidating effect. There has been various ways in which the journalists' community and publishing community in Swaziland over a period of years has been subjected to threats and intimidation and seizure of material and using also some of the aspects of the draconian terrorism acts to silence the publication of information and opinion. This latest episode certainly is part of that pattern and it is particularly worrisome that the current appeal process against the editor has not yet even been concluded. So he is facing both uncompleted appeal process as well as new charges.

Are there any signs that things might change for the better in Swaziland in terms of freedom of expression and media rights?

At the conclusion of the UN Human Rights Council's hearing on Swaziland's human rights record several years ago, the government authority certainly made commitments to their peers in the hearing at the UN Human Rights Council that they would take steps to remedy human rights problems in the country and they have made commitments also involving the International Labor Organization's hearings on countries with specific freedom of association and related freedoms' challenges. But when you see a case such as this which has unfolded this week in a very dramatic manner and completely unnecessary manner, it raises serious doubts about commitments to fulfill those promises. There was absolutely no reason to send police to arrest these two accused, they are well known, they could have approached a police station and go accompanied by their lawyer to a court, to a magistrate's court and heard the charges against them. There was absolutely no reason for this heavy layer of intimidation that surrounded the circumstances under which they were arrested.

Mary Rayner is a researcher on Swaziland at Amnesty International.

The tiny kingdom of Swaziland has been marking the 44th birthday of King Mswati III, Africa's last absolute monarch. The authorities responded to pro-democracy protests with detentions and road blocks. (19.04.2012)