Swanky rides amid changing tides at the Geneva Motor Show | Business| Economy and finance news from a German perspective | DW | 07.03.2018

Swanky rides amid changing tides at the Geneva Motor Show

The Geneva Motor Show is set to open its doors to the public after two days dedicated to sneak previews for journalists. On her way out, DW’s Janelle Dumalaon says she wasn’t always sure where the journey was heading. 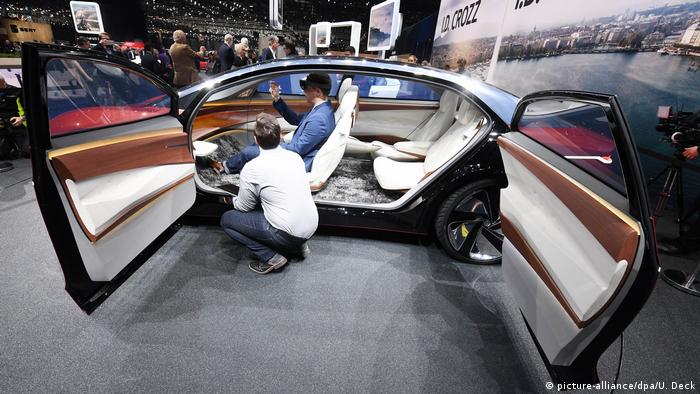 This year's Geneva Motor Show was meant to showcase a glitzy, tech-filled joyride into the future. Now, only if the present wasn't so complicated. All things considered, the world's carmakers aren't in such a bad place.

Gleaming cars, but lack of innovations at Geneva Motor Show

A Trump bump on the trade route

The Geneva Motor Show was a platform for especially Europe's carmakers to come to a vigorous defense of free trade in the face of the seemingly knee-jerk protectionism of Trump's White House.

But many were hard pressed to say what it could mean — understandably, considering that it's hardly to be taken for granted that Trump himself is completely clear on the implications of a blanket tariff.

Now German cars only make up about 8 percent of market share in the US. But Americans tend to buy the bigger, most expensive models — higher profit margins offset comparatively lower sales volumes.

Now some would argue that if the US customer bases tended to the kind of people who would spend on bigger and pricier cars anyway, and the costs from additional tariffs were passed on to them, they'd be willing to pay a percentage more. But that appears to be cold comfort for the carmakers.

Volkswagen, for one, commented on the show that it would be important that national governments intervene should punitive tariffs transcend Twitter and actually become threatening.

That would sound reasonable, were it not for the fact that the emissions scandal has brought cushy relations between government and the auto industry under scrutiny. As such, a lot of political capital has already been expended in order to support the auto industry

"We need to improve our reputation, that has taken some negative impact during the last two years," said Bernhard Mattes, the former auto exec turned German auto industry lobby group chief, in a new and what must be unenviable posting. "But I think given everything we have, we can still make a difference in the future of mobility."

But ditching the old for the new doesn't seem to be the priority, if the Geneva Motor Show is anything to go by.  Here too, the familiar, recurring refrain of diesel engines being needed in order to meet steadily tightening CO2 regulations in the European Union is sung loudly and clearly.

"I'm a big friend of diesel. We have too many complex, chaotic discussions about it," Audi chairman Rupert Stadler told DW in Geneva. "I can't accept that diesel's made out to be dead now. If you look to SUVs, it's still the best technology. We will be producing and developing diesels until the next generation."

And what of diesel car sales already declining?

"Diesel sales have been falling from 2016 to 2017," said Stadler. "It's a different picture for smaller cars and for bigger cars. In the smaller cars we can see the diesel mix is declining, in the bigger cars, we have absolutely stability."

And German carmakers are also continuing to reject hardware retrofits to older, polluting diesels — the ones directly in the path of burgeoning diesel bans in cities.

"By the time we are ready with the testing and everything, it would take us two to three years," said Mattes.

That the likes of Toyota dropped diesels from its passenger cars in Europe — making news in Geneva — seemed to make little impression on the diesel diehards.

But for those for whom driving is a chore best avoided anyway, the future of diesel might not be the most engaging auto industry development. But the Geneva Motor Show had something for them too.

Cars for the collective

Essentially, self-driving cars won't be for the selfish. Autonomous cars would be kept in motion, picking up passengers or groups of them and dropping them off, and picking up new riders every day.

Renault's EZ-GO, a robo-vehicle at the Geneva Motor Show — essentially an autonomous traveling lounge with white upholstery — looks more like it should hover, rather than roll down streets.  But it's supposed to be an example of the future of mobility, in a world where it might no longer make sense for individuals to own vehicles.

And Volkswagen's school bus version of its Sedric concept — an autonomous repository for children going places, with what can only be optional adult supervision — is meant to continuously convey groups as well.

In the event autonomous cars really become the norm, then that might actually lead to fewer cars on the road. In that case, future iterations of the Geneva Motor Show might actually be a lot emptier. But hey, quality, not quantity, is a lesson that car industry might still have to keep on learning.