In a joint operation, police in Germany, Switzerland and the Netherlands have searched the apartments of suspected neo-Nazi terrorists. The case bears similarities to the operations of Germany's NSU terror cell. 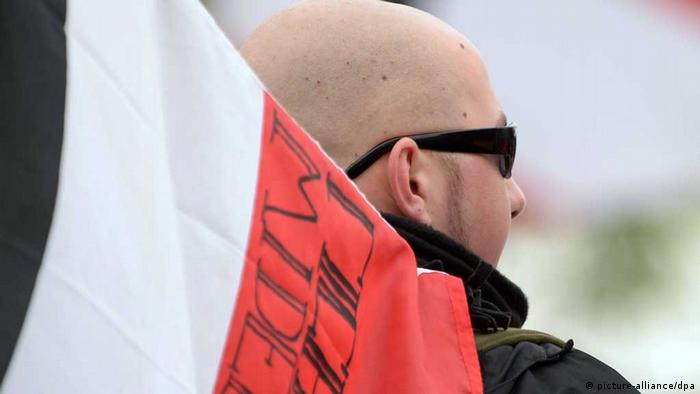 Germany might have escaped another string of right-wing terrorist attacks. On Wednesday (17.07.2013), several of Germany's regional police forces, together with anti-terror squads in Switzerland and the Netherlands, conducted raids against a neo-Nazi group which, according to the German authorities, might have been planning terrorist attacks "to rid Germany of its political system."

Apartments and prison cells of six suspects were searched in three different countries. According to media reports, it was mostly data that the police secured. Evaluating the material could prove to be difficult, however, as the suspects are believed to have encrypted their communications with a self-devised code 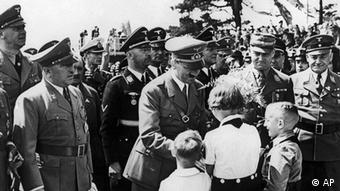 In this archive photo, Adolf Hitler receives bouquets of flowers from children

None of the suspects was arrested as the police did not have indications for any concrete terrorist attack. Prosecutors, however, have been investigating the suspects for months, believing that they were planning to acquire weapons and explosives. They are suspected of having founded a terrorist organization – a so-called "werewolf" group.

The term stems from the Nazi period when at the end of the Second World War, SS chief Heinrich Himmler founded the underground organization "Werewolf" which was made up of small special units that operated independently. Behind enemy lines they were supposed to sabotage allied troop installations. The new 'werewolf' group apparently wanted to emulate these guerilla tactics.

According to the German news magazine "Der Spiegel", one of the alleged leaders of the group is a Swiss, Sebastien N., who is known for having a swastika and a Hitler tattoo on his chest. The German suspects Denny R. and Heiko W. from Lower Saxony and Mecklenburg-Western Pomerania contacted N. via the "White Wolves Terror Crew" (WWT), explains Andre Aden. The journalist works in the investigative media project "recherche nord," a group of freelance authors and photographers who, since 2004, have focused on neo-Nazi networks. 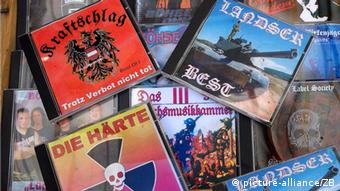 The WWT is a closed network founded by members of the right-wing music scene, while "White Wolves is the name of a band," says Aden. "The trigger to start WWT was probably the music, but you can't divide these two things. The political aspect is also always a part of it," he added.

But the news of the raid still came as a surprise to Aden, especially the suspicion that the young men could drift into the underground. "Actually deciding to build bombs and attack the state; that's a tendency we didn't see," explained Aden.

The best-known example of a right-wing terror cell is the National Socialist Underground (NSU), a terror trio that between 2000 and 2007 killed ten people, eight of whom were of Turkish origin. The only surviving member of that cell, Beate Zschäpe, is currently on trial in Munich and is viewed as hero in the neo-Nazi scene. 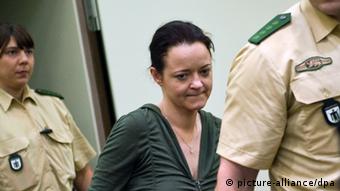 Zschäpe is seen as a hero in Germany's neo-Nazi scene

Zschäpe and her two fellow NSU members lived in hiding for ten years – something Aden sees only very few neo-Nazis being able to accomplish.

"Many of today's neo-Nazis are not willing to take that last step. Only a handful would really do this," he says. Aden does not think that the WWT groups would have gone into hiding for several years.

But the neo-Nazi expert believes that the brutal militant violence is part of being a neo-Nazi. That's why no one should be surprised when raids on the extremists uncover caches of weapons.

That is precisely what happened last week when police in Bavaria searched some 70 apartments of members of the right-wing network "Freies Netz Süd." What they found was pepper spray, batons, knives, weapons and stick grenades. "Many of the members have criminal records," explained Marcus Buschmüller of the anti-fascist group aida. "Violence, brutality and contempt for others is part of the right-wing network."

Police in France are questioning Norwegian neo-Nazi Kristian "Varg" Vikernes over a suspected terror plot, but have yet to prove close links to Norwegian mass killer Anders Behring Breivik. (17.07.2013)

Germany's far-right extremists use the Internet to reach young people - and are using more and more foreign providers in order to avoid the law. Meanwhile, big sites like Facebook are taking action against extremism. (10.07.2013)