A man is being treated for a suspected case of Ebola in the German city of Düsseldorf. He has been transported from his home in Bochum to a special isolation unit. 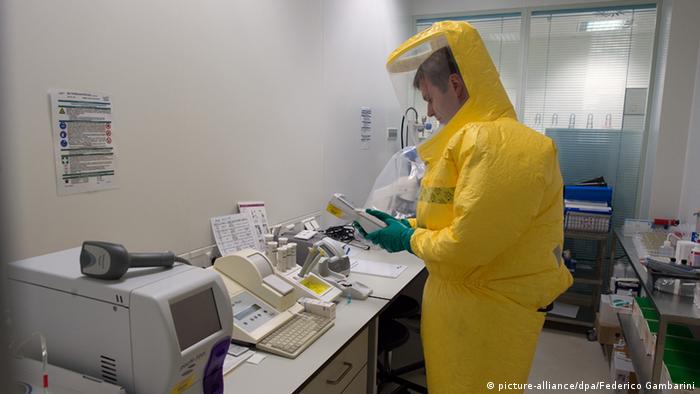 Fire services took the man from his home in the city of Bochum to the University Hospital in Düsseldorf, around 43 kilometers away (27 miles), on Sunday night.

He is currently receiving treatment in a special isolation unit, under strict security.

The unit can be totally sealed-off from contact with the outside world.

The hospital said it also has special facilities to catch and sterilize air, as well as waste water, to prevent the release of pathogens into the city's sewage system, ensuring "complete protection of patients, visitors and attending staff."

Authorities in the state of North Rhine-Westphalia said the case did not pose a threat to the wider population.

The first results from an examination of the patient are expected late Monday afternoon, according to AFP news agency.

The man reportedly spent time in Guinea. It was not immediately clear if he originated from the West African country.

Guinea, Sierra Leone and Liberia saw the majority of cases of the deadly virus in the most recent outbreak, in which more than 10,000 people have died.

The World Health Organization recently declared that the chances of Ebola spreading to other countries had decreased.

German medical facilities have looked after several cases of the virus, including a Senegalese doctor who was treated in Hamburg and a Ugandan doctor in Frankfurt.

In October 2014, a United Nations worker died in the eastern city of Leipzig after being infected in Liberia.