Tino Chrupalla, leader of the right-wing AfD, has called for more respectful political debate in Germany, after his car was set on fire overnight. Police are investigating a potential political motive. 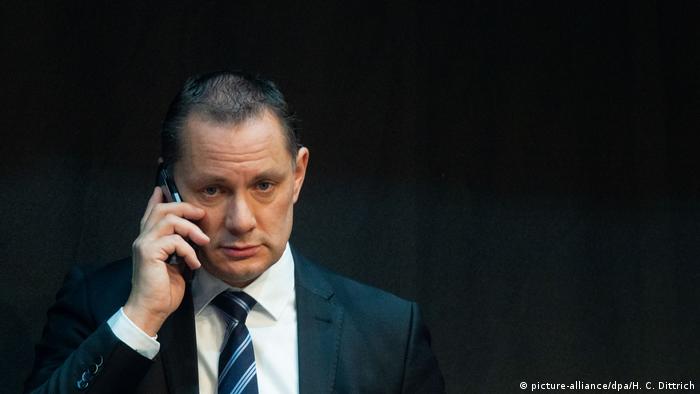 A suspected arson attack wrecked the car of Tino Chrupalla, leader of the German right-wing AfD party on Sunday night. The local fire brigade was called to his house in Gablenz, a town near the border to Poland in the state of Saxony.

The car was parked on his property according to Chrupalla, who called the incident a "direct attack on his family". Chrupalla had to be treated for smoke poisoning but was released from hospital this morning. The police are investigating whether a political motive was behind the attack.

Responding to the attack, Chrupalla said it was further evidence of polarization in German politics. Last week, in the aftermath of the far-right shooting in Hanau, he had called on politicians from all sides — including his own party — to soften their rhetoric on sensitive issues. He renewed this call on Monday:

"This attack on my family and myself is further evidence of what I have been warning before and why I have been calling all politicians to be exercise restraint and self-reflection. All elements of society have to act. The security of our country is at risk."

Jörg Meuthen, co-leader of the party, condemned the attack saying it was only a matter of time until more people were harmed. He argued that strong criticism of the AfD might have fueled the suspected arson attack, saying: "Again it shows what fear mongering by other parties against the AfD can lead to."

Appealing to "all journalists and politicians" he demanded that all verbal attacks on the AfD be toned down. Extremists would use them as an invitation for committing crimes, he warned.

Chrupalla had similarly told the AfD party conference in Saxony that the party was being politically and socially ostracized. However, he also argued that the party's own behavior was not unblemished and asked for more restraint in their use of language.

Other parties condemn the attack

Saxony state premier Michael Kretschmer, from Chancellor Merkel's Christian Democrats, said that no incidents of violence or vandalism should be tolerated.

"Someone who takes to such measures divides society and encourages more aggression. One action leads to another and we need to break this circle of violence," Kretschmer said. However, he added that violence could also include verbal attacks, saying that "the AfD has made large contributions to this over the years."

The top Social Democrat in Saxony, Martin Dulig, took to twitter and wrote: "Violence against politicians is unacceptable. This is not a form of political discourse. I highly condemn it."

Rico Gebhardt of the Left party (die Linke) in Saxony also said violence was out of bounds, "even against political enablers of violence," accusing the AfD of heating up the discourse in German politics.

Chrupalla only took over as head of the right-wing party after Alexander Gauland in November last year. He has been a member of the national parliament, the Bundestag, since 2017 after winning a direct mandate from Görlitz, the most easterly city in Germany. Before that he worked as a painter and decorator in the region.