The Sudanese military has promised elections after its agreement with the main opposition coalition broke down. The announcement comes after dozens of protesters were killed by the army and militia. 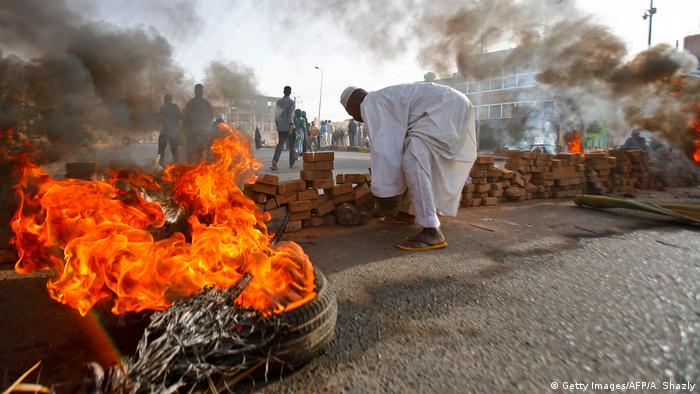 On Tuesday, Sudan's army rulers canceled all agreements they had reached with the main opposition coalition and announced that elections would be held in nine months.

The announcement comes a day after the army and militias used deadly force to quash a weeklong sit-in protest outside army headquarters in the capital, Khartoum, that left at least 30 dead and dozens more wounded.

"The military council has decided to stop negotiating with the Alliance for Freedom and Change and cancel what had been agreed on, and to hold general elections within nine months," General Abdel Fattah al-Burhan, the head of the Transitional Military Council (TMC), said in a statement broadcast on state television early on Tuesday.

The violent military crackdown on protesters calling for a quick transition to civilian rule has raised the prospect of the country plunging into civil war and chaos.

The Alliance for Freedom and Change, a coalition of opposition forces that had been negotiating with the TMC, called on Monday for "an escalation of the revolution" in response to the military crackdown.

The opposition political alliance announced "the beginning of an all-out political strike and civil disobedience, and termination of negotiations with the Coup Council (TMC)" until it is overthrown.

"The coup council is no longer fit to negotiate with regarding the future of the Sudanese people," it said in a statement, calling on the armed forces "to side with the choice of the people in overthrowing the current regime and install a fully civilian government."

The TMC ousted strongman Omar al-Bashir in April following months of protests against his 30-year rule. Since then, the military and security forces have repeatedly shown signs of division and factionalism.

Protesters suspect the military rulers will not hand over power to civilians, but merely create a facade that conceals the structures of the old regime.

Negotiations between the Alliance for Freedom and Change and TMC have been deadlocked since mid-May when the two sides agreed to a three-year transition period before elections and the composition of a legislative body.

A major sticking point remained the make-up of the leadership of a sovereign ruling council during the three-year transition, with the military demanding it maintain significant powers.

Burhan said now that talks with the protest leaders have ended, the military council will form an interim government to prepare for elections.

He also said an investigation would be launched into the breaking up of the sit-in. The violence has been condemned by the US, UN and other powers.

However, Burhan did not mention the security forces, instead blaming protest leaders for inflaming the situation by "extending the negotiations and seeking to exclude other political and security forces."

The United Nations Security Council have placed the topic high on their agenda as they convene on Tuesday at a closed-door session.