A dead animal could end up becoming the star of this year's documenta exhibition in Germany. Artist Peter Friedl's stuffed giraffe from Kalkilya zoo in the West Bank is garnering a lot of attention. 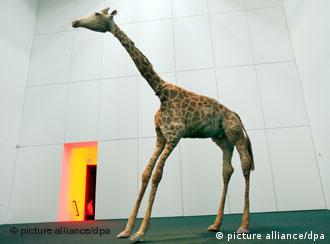 Let your imagination run wild when you look at Brownie, Friedl suggests

Her eyes are halfway shut and her coat looks worn like those of stuffed toys that have been played with for a very long time. Brownie the giraffe also looks a little small when compared to other specimens of its kind. But the stuffed animal has still become the center of attention at the 12th documenta that opened in the central German city of Kassel last weekend.

Until five years ago, Brownie was a favorite among visitors to Kalkilya zoo in the West Bank. She died when the small town became the center of a military offensive and Israeli troops attacked a Hamas camp. Brownie panicked, ran into an iron rod, then fell to the floor and died of heart failure. 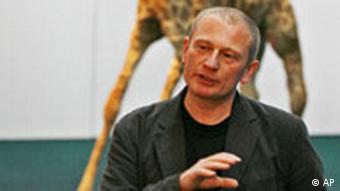 Austrian artist Peter Friedl said he's not interested in presenting the animal as a witness for the prosecution, nor does he intend to take a side. Instead, he's aiming to add an aesthetic experience to the flood of pictures that can be found in the media.

"If you make the mistake of competing with media images by working in a documentary style, you're bound to lose," he said. "Fiction and documentation only produce clichés in this situation. I was interested in asking: What happens when I bring the real thing with me?" 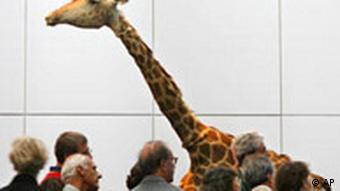 The sculpture has become a visitor magnet

But the example of the dead giraffe from Palestine also stands for the overall concept of this year's documenta. "Migrating forms" is the overarching theme of the exhibition. It means that a picture, a sculpture or an installation doesn't only change in a new environment, but also takes on new meaning. The documenta is trying to give back images to visitors so they can trust their own imaginations again.

Friedl said he views the giraffe as a sculpture that can and should help visitors invent stories to go along with it.

"They just have to let it happen," he said. "Everyone comes with preconceived ideas. You either know a giraffe or you think, 'it looks a little strange.' A lack of information, which would sometimes be desirable, doesn't exist in art."

Roger M. Buergel, artistic director of Documenta 12, told DW-WORLD.DE in an interview that he rejects "aesthetic shocks" of large exhibitions and explains why it is important to him to bring art to the public. (16.06.2007)

Documenta Artists Sees Her Work Scraped Off the Streets

An artist showing at Germany's Documenta exhibition of cutting-edge contemporary art is irate that her work, which consists of white tape stuck on roads to form crosses, was quickly removed by Kassel municipal workers. (15.06.2007)