In Burundi five school students are still in prison because they allegedly defaced a textbook photo of President Nkurunziza. Parents and others are calling for their release, but the authorities refuse to climb down. 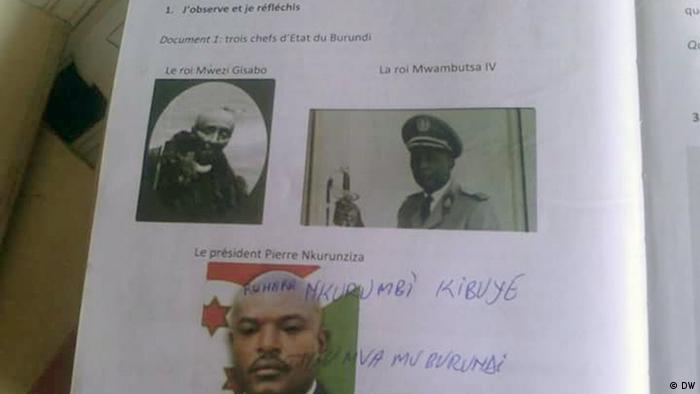 Many school textbooks in Burundi contain photos of President Pierre Nkurunziza and it appears that those caught tampering with them can face the wrath of an authoritarian regime.

A number of secondary school students were alleged to have defaced a picture of Nkurunziza with felt tip pens. They added stubble to his face and his scalp and gave him giant nostrils and round, black eyes.

In the margin, they wrote "Ruhara" which in the Kirundi language means "bald-head," and then "intumva mu Burundi," which translates roughly as "Burundi's obstinate one," followed by "Nkurumbi" which is a play on the president's surname Nkurunziza and means "bad news."

Head teachers - many of them supporters of Nkurunziza - were aghast at the sight of these scrawls and it wasn't long before the educational authorities sprung into action. In Rubiza, near the capital Bujumbura, 334 school students were suspended from class. The ban on attending school was later retracted, but many students refused to return either as a gesture of protest or because they feared reprisals.

The dispute took a more sinister turn when 11 school students, including six minors, were arrested in the central Burundian city of Muramvya on June 3. They, too, were accused of having defaced a picture of the president. Fellow students mounted a demonstration in protest against the arrests and two of the young protestors were hit by police bullets. Christophe Boulierac, spokesman for the UN children agency, UNICEF, said this was clearly a violation of international law. There was also the potential for further unrest, he added. 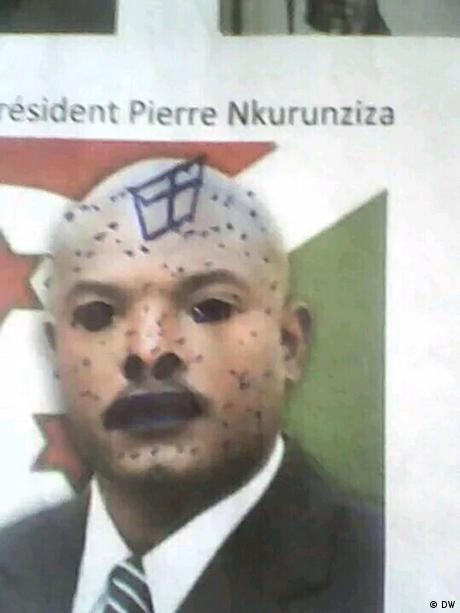 Burundian schoolchildren have been sent to prison for allegedly making scribbles like these.

Violent clashes have flared up frequently in Burundi since President Nkurunziza announced at the end of April 2015 that he would be seeking a controversial third term. He was re-elected in June 2015 despite mass protests in a poll which international observers say was flawed. Severe restrictions on the right to freedom of expression have been imposed in the East African nation and journalists complain of harassment and intimidation.

The arrest of the 11 school students in Muramvya has also stoked tensions, pitting worried parents, fellow students and human rights activists against government representatives and court officials, who are trying to justify the measure.

Six of the 11 who were detained - three girls and three boys between the ages of 14 and 17 - have been released from prison on the orders of the court in the meantime. But five students, who have apparently reached the age of majority, remain incarcerated. Their defense lawyer, Eric Batungwanayo, told DW that they, too, should be set at liberty. In ordering their detention, the court overreacted and the young people should not be deprived of their right to an education, especially with annual exams looming.

The parents share these concerns. "My boy is a good student, perhaps he could be a minister one day. But now his whole future is in doubt, " said one mother. She pleaded for his release so he can go back to school. "Children always make mistakes. I think he ought to be forgiven. God will judge him," she said.

But the governor of Muramvya province Emmanuel Niyungeko was not in a forgiving mood. The law is the law, he said during media interviews in which he linked the children's actions to blasphemy. "You know that after God comes the king, that's what it says in the Bible. But these days, we don't have a king but a president," he said. You have to defend the honor of the president because he comes from God, maintained Niyungeko, a member of the ruling CNDD-FDD party. "These young people have gravely insulted the president and the courts can't simply ignore this," he added.

Education minister Janviere Ndirahisha said that it was only very seldom that something like this happened to children in Burundi. However, one couldn't simply declare that all teenagers aged 15, 16, or 17 were innocent as a matter of principle, she added.

UNICEF says that more than 300 children have been arbitrarily detained in Burundi since the protests erupted in April 2015. Many of them were incarcerated together with adults under brutal conditions.

As Burundi marks Memorial Day, commemorating the genocide against Hutus in 1972, former president Ndayizeye spoke to DW about his views on the celebration and reconciliation. (29.04.2016)