The mountains near the eastern German village of Seiffen have long been emptied of their tin and silver, but the people there have found a sustainable gold mine instead: Christmas. 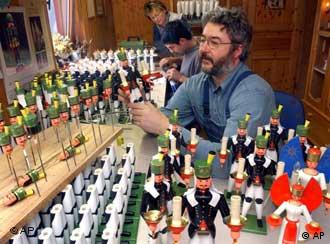 "Christmas keeps our town going," Mayor Wolfgang Schreiter said of Seiffen, nestled in the Erzgebirge (Ore Mountains) near the Czech border. "It's our trump card."

With a jobless rate of just 5 percent, Seiffen is an economic oasis in a region where 15 to 25 percent of the workforce is on the dole.

In the heat of each summer, the Yuletide operations in this town of 2,800 denizens grind into gear. Hundreds of small craft shops, most of them family-owned, begin production with male wood-turners shaping decorations and women adding the finishing details with tiny paintbrushes. 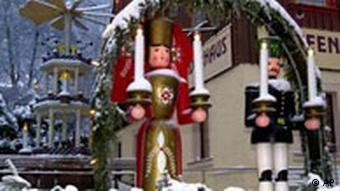 Decorations from Seiffen include wooden figurines which would grace any Christmas tree, but there are also a dizzying array of candlesticks, nutcrackers and incense-holders bound for export to other European countries, the United States and Japan.

One of the biggest companies in town, Glässer, has 130 employees and now posts 20 percent of its turnover abroad, said managing director Klaus Hübsch.

In the run-up to Dec. 24, some 200,000 tourists descend on the quaint open-air Christmas market. Tour buses deposit visitors at the Toy Museum, which traces the former miners' gradual transformation of Seiffen into a Christmas kitsch mecca over the last four centuries.

"They love them in the United States -- the Americans think all Germans run around like this," Hübsch told his guests.

Showing how lovingly the trinkets are made also helps sales, of course.

"People understand better why we ask the prices we do," Hübsch said.

Seiffen has come a long way since its miner town days. In communist east Germany, all the artisans were grouped in collectives from 1972 and essentially only produced decorations for export at a time when the East German regime was heavily dependent on foreign currency.

Since reunification in 1990, six hotels have gone up, much of the village has been refurbished and tourists have been pouring in -- albeit overwhelmingly during the Christmas season.

Seiffen during the Christmas season

"We have seen astounding growth," Mayor Schreiter said. "There was a lot of ground to make up."

With the fall of the Wall, the artisans reclaimed control of their businesses.

"It hasn't been easy," said Matthias Schalling, who relaunched a firm founded in 1904 by his great-grandfather. "We had to reinvent ourselves and find new clients."

One of the most pressing concerns of the artisans is to maintain the training program for "making wooden toys" -- a specific apprenticeship offered by the local vocational college.

This year, some 20 apprentices graduated from the three-year program. But in the new Germany, the program that enjoyed official recognition by the communist authorities is facing the axe. There is also an encroaching commercialization on their centuries-old craft.

Schreiter said he aimed to ensure that Seiffen did not turn into "a kind of Las Vegas."

"We are trying to put a stop to anything that goes too far," said Glässer's Hübsch -- starting with garish colored garlands. White lights -- and wooden handmade decorations -- are more faithful to the true spirit of Christmas, he said.

An Eastern German Beacon of Hope

While eastern Germany has long been seen as the country's economic problem child, some places, such as the town of Kölleda, have managed to attract international businesses that keep unemployment under control. (Oct. 6, 2004)