Against the backdrop of Euro 2016, nationwide strikes are washing over France as workers protest labor market reforms making it easier to hire and fire employees. Even the Eiffel Tower was closed because of the walkouts. 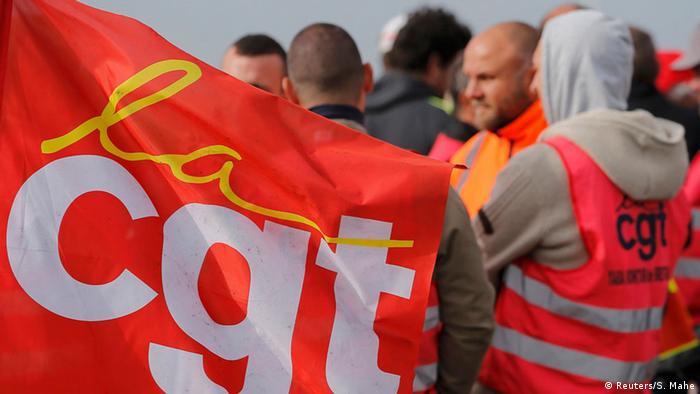 In essence, the issue is about a proposed law that labor minister Myriam El Khomri drove forward for Prime Minister Valls' government. The idea was that labor legislation allowing for more flexibility would help reduce the unemployment rate, which currently stands at 10 percent and more than doubles to 24 percent for young people.

Because no majority was found for the bill - not even among the prime minister's fellow Socialists - the government forced it through parliament without a vote. The government justified its actions with a paragraph from the constitution that Francois Hollande once called a "denial of democracy" at a time before he became president. 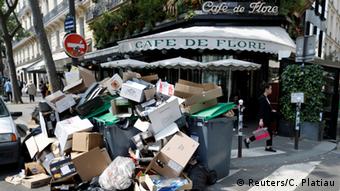 Trash piled up in France as garbage collectors stopped work

The bill has now landed in the Senate. It's already gone through several revisions, and more changes could be on the way.

"But the core will remain the same," said Isabelle Bourgeois, a researcher at the University of Clergy-Pontoise. "The law would no longer see the state as the one responsible for labor law and for regulating work hours; rather - and that's really a reform - the company itself would be, specifically the social partners within the company."

The labor unions would then be in second place, followed by the government and then the industry associations, Bourgeois told DW.

"Underneath the surface, this is about the end of the 35-hour-work week, even if no one has said that," she said.

Not all trade unions reject the bill. The reform-oriented union CDFT relaxed their resistance after having achieved some concessions in the form of changes to the bill.

"The head of the CFDT, Laurent Berger, is even a strong advocate of the law, because it enables negotiations within the company," said Dominique Andolfatto, trade union expert and political science professor at the University of Burgundy - Franche-Comté.

"In contrast, protests continue from trade unions like CGT, which used to be close to the Communist Party," Andolfatto told DW. "But even the CGT doesn't wish to scrap the law completely, but achieve more flexibility within it." 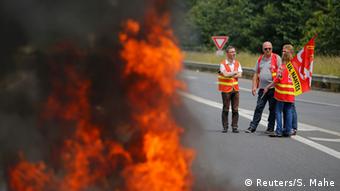 CGT strikers in Nantes put up a roadblock in early June

According to Bourgeois, the strikes are less about labor legislation than a demonstration of power. "The striking trade unions are Communist and Trotskyist," she said.

Bourgeois explained that their power comes from controlling strategically important parts of public services. "They work for the power plants, in garbage collection, at the docks, the oil refineries, and in transport. And then there are the professional unions like that of the pilots." But they're all striking for different things, she said.

"This is about many differing individual struggles that are all being lumped together under the general heading of 'protest against labor market reform,'" she said.

In Germany, this would not even be possible, because trade unions are only allowed to strike when comprehensive salary negotiations fail. In case of doubt, what is allowed and what isn't is decided by the courts. As such, a single law doesn't exist.

"In contrast, strike laws in France are rooted in the constitution, and unlike in Germany, recognize political strikes and solidarity strikes," said Julie Hamann of the Franco-German program at the Berlin-based German Council of Foreign Relations (DGAP). "That's why reform projects often face sweeping strikes across many industries and sectors, which influence the country.” 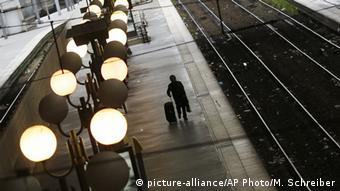 Strikes are still supported in France, despite stopped trains like here in Paris in early June.

In contrast to Germany, where many criticized the strikes organized by locomotive drivers and pilots, the French are more accepting of strikes. But not indefinitely.

"At the start of the mobilization, there was a lot of support, around 55 to 60 percent," Hamann told DW. "But the longer the strikes went on affecting public life, the more support from the population dwindled. Now it's below 50 percent."

Political science professor Andolfatto said that despite the "nuits debout" - nightly protests from young French people in France - attitudes towards strikes are mixed among the youth. "The attitudes range from indifference to more or less radical forms of protests," he said.

For most French people, supporting strikers is a form of vicarious protesting, said researcher Bourgeois.

"They're not employed by the state, they're not privileged, or they can't find any work. But they can't strike, because in the private sector there are hardly any trade unions," she said. "But they're dreaming of striking, of being heard. It's a proxy struggle." 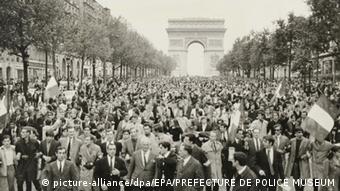 This Friday, Philippe Martinez, head of leftist trade union CFT, is meeting French labor minister El Khomri. "Only then will it be clear whether the sides are able to agree on compromises," said DGAP's Hamann.

But what is certain is that there is no turning back for the French government, according to Bourgeois. "The law definitely has to be forced through, so that the government doesn't lose face," said Bourgeois. "It's also a signal to Brussels: 'Although we, France, are always failing to adhere to the stability pact, we still manage to enact reform despite all the difficulties.'"

Although both the government and the population are aware that the country needs reforms that extend far beyond the labor market, these will probably only be implemented in the next president’s term, according Hamann. Francois Hollande is the most unpopular president of the Fifth Republic.

"With this lack of trust, the chances are slim that Hollande would be able to enact deep reform before the end of this term," she said.

French pilots have started a 4-day strike, disrupting travel for fans coming to the country for the Euro 2016 soccer Championships. Strike, fears of terrorism and flooding have overshadowed the start of the tournament. (11.06.2016)

Euro 2016: 'No instructions to disrupt actions at stadiums'

The CGT union leader said there are no plans to block fans from reaching the matches following nationwide labor strikes. But plans to clean up the city's garbage crisis may be "a bit optimistic." (10.06.2016)

Over 80,000 people attended a concert under the Eiffel Tower, as France opened a massive fan zone ahead of the European Championship. With crowds pouring to Paris, organizers worry about strikes and security. (10.06.2016)