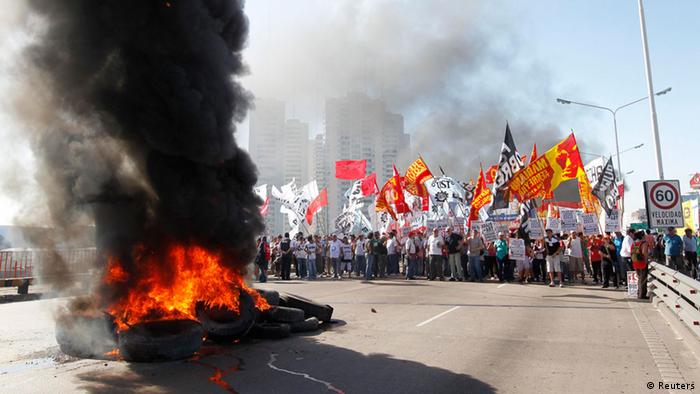 Thousands came out in protest Tuesday, as a 24-hour union-led general strike disrupted public transportation, gas stations and banks. The demonstrations follow similar strikes throughout the country over inflation and rising crime rates on November 8.

Tuesday's strike canceled domestic flights across the country, brought bus and train lines to a halt, and led to road blockages along major auto routes (pictured above).

"There are hundreds of road blocks across the country," Oscar de Isasi, one of the strike organizers, told the DPA news agency.

Backing the strike is Hugo Moyano, head of the Argentine Confederation of Workers, who until last year supported Fernandez. A faction of the Argentine Workers Central union is also supporting the national action.

Moyano wants lower taxes to help compensate for the country's rising inflation rate. The striking workers have also called for an increase in pensions and the minimum wage.

The latest strikes are part of an increasingly tense relationship between Fernandez and the unions as Argentina's economy turns south.

An inflation rate of 25 percent has slowed the country's economy. Argentina's growth rate fell from nine percent in 2011 to just 2.2 percent this year, according to the World Bank.

The struggling economy has shown itself in Fernandez's popularity, which has plummeted since her re-election last year with 54 percent of the vote. Her approval rating sits at 34 percent, a significant drop from the 60 percent she enjoyed the week of her re-election, according to the Giacobbe and Associates polling institute.

Fernandez is constitutionally prohibited from running for a third term in 2015, but her supporters in Congress have been lobbying for an amendment to make that possible.