The French city's mayor said "once again, enough is enough." The incident comes only weeks after vandals spray-painted swastikas on Jewish gravestones in a nearby town. 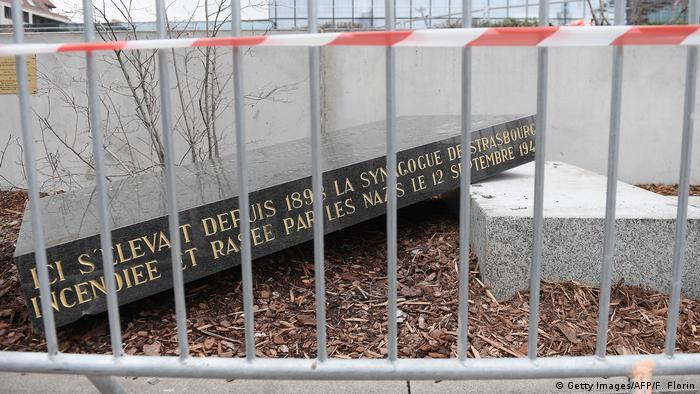 "A new incident of anti-Semitism in our town," deputy mayor Alain Fontanel wrote on Twitter as a caption to a picture showing the black marble slab knocked off its plinth.

Hitler Youth ransacked and burnt down the Old Synagogue in September 1940, three months after German forces invaded France and occupied much of its territory.

Strasbourg is the capital city of the Grand Est region, formerly Alsace, in northeastern France. It is also the seat of the European Parliament and close to the German border.

Read more: Being Jewish in France: 'Just go back to Tel Aviv!'

The stone lies near another memorial, the Avenue of the Righteous, which honors the work of non-Jews who helped save Jews during the Nazi occupation.

"The site is itself a response to whoever did this repulsive act because it symbolizes both the actions and horrors of the Nazi regime and the French people's power of resistance," Mayor Roland Ries wrote on Facebook ahead of his visit to the site.

France is home to the largest Jewish population in Europe and has seen a surge in anti-Semitic acts in recent years.

In February, vandals spray-painted swastikas on 96 graves in a Jewish cemetery in the town of Quatzenheim, some 20 kilometers (12.5 miles) northwest of Strasbourg.

In response, French President Emmanuel Macron has vowed to draft a new law against online hate crime and take actions to close down groups that spread hate and violence.