Stiglitz, De Blasio and Warren team up against inequality | Business | Economy and finance news from a German perspective | DW | 12.05.2015

Joseph Stiglitz, a Nobel Laureate in economics, has teamed up with New York Major Bill De Blasio and US Senator Elizabeth Warren to propose a major economic reform agenda for the US. Its focus: Reducing inequality. 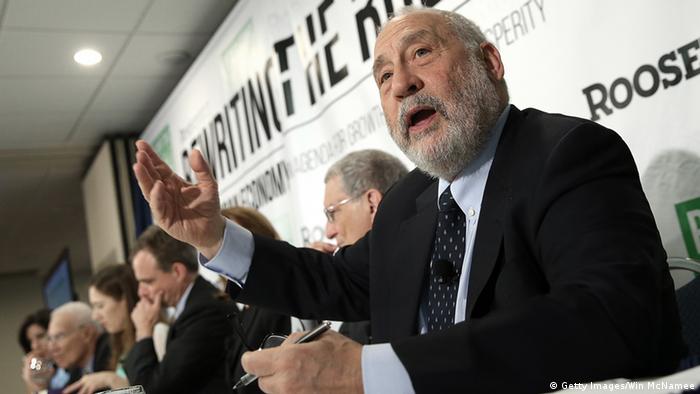 On Tuesday at the National Press Club in Washington, Stiglitz, a former chief economist of the World Bank, presented new Roosevelt Institute report, "Rewriting the Rules," calling for major changes to US economic policy aimed at reducing economic inequality and restoring the fortunes of the middle class.

Stiglitz's message is that "equality and economic performance are in fact complementary rather than opposing forces." The new report sets out a policy agenda composed of dozens of measures aimed at improving the US economy by reducing inequality.

A crusade against excessive inequality of wealth and income is re-emerging as a key political focus for progressive Democrats. Stiglitz, who has written two books and many papers on the economic impact of extreme inequality, was joined at the "Rewriting the Rules" report's launch by New York City mayor Bill De Blasio and by the senior US Senator from Massachusetts, Elizabeth Warren.

Mayor De Blasio has been building a national profile as a leading progressive, giving talks around the country on the need for major policy reforms. Senator Warren, a former Harvard Law School professor who led the fight to establish the US Consumer Financial Protection Bureau, has likewise positioned herself as a champion of America's declining middle class. 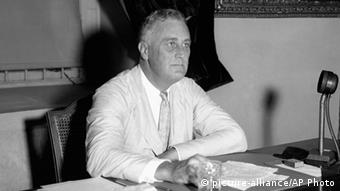 President Roosevelt was from a wealthy family, but was a champion of economic reform in the Depression years

"Rewriting the Rules" calls for a variety of tax reform measures, including taxing US corporations on their global income, increased taxation of "bads" like pollution, higher taxes on capital gains and dividends, and a financial transaction tax.

It proposes making full employment a core goal of US economic policy, supported by changes in monetary policy and a 10-year campaign of massive infrastructure investments.

Improvements to working conditions are also called for, including a higher national minimum wage, reduced barriers to unionization, legislation requiring paid sick and family leave, and other measures.

Some additional improvements to the economic security of the majority of the US population proposed in the report are early childhood education, making health care affordable by opening Medicare to everyone, improved tuition financing, a public option for mortgages, a new postal savings bank, and a pathway to citizenship for undocumented workers.

The report is meant to reshape the US economic policy debate in the lead-up to the 2016 presidential election year. It was developed in cooperation with the Roosevelt Institute, a progressive think-tank connected to the Franklin D. Roosevelt Presidential Library that aims to promote policies for achieving FDR's "four freedoms" - freedom from want, freedom from fear, freedom of religion, and freedom of speech.

The price of inequality

DW talks to Joe Stiglitz about the price of inequality

In an interview with Deutsche Welle at the World Economic Forum on Latin America in Mexico on Friday, Stiglitz explained his focus on inequality by saying it was a matter of social justice, economic health, and democracy.

"When you have so much inequality, it actually interferes with the functioning of our economy," he said. Stiglitz's economic research has shown that increasing concentration of wealth and income in the hands of a tiny minority, while most people's income stagnates or declines, reduces economic growth as well as worsening other key economic indicators.

Moreover, extreme inequality is poison for democracy, Stiglitz said: "I believe very strongly in democracy. I don't think you can have a functioning democracy with these extremes of inequality. In the US, we've moved more towards a system of one dollar one vote than one person one vote. That's not true democracy."

Excessive inequality is a problem around the world, not just in the US, Stiglitz added: "Other countries should study us to learn what not to do, and how to prevent" extremes of inequality.

De Blasio and Warren have both been going on national speaking tours decrying the fact that nearly all the gains from economic growth over the past 30 years have gone to the top 10 percent - and within that, primarily to the top 1 percent - with the bottom half of the population poorer than it was three decades ago.

Now, they've joined forces to get their message across. On the weekend, the Washington Post and a variety of other newspapers across the US published an op-ed co-authored by the two Democrats entitled "Reviving the American Dream."

Their message: "Trickle-down economics has failed disastrously," and a major push for new economic policies is needed that would restore the fortunes of America's middle and working classes.

The premise of trickle-down economics - a policy approach that has dominated in the US since the Reagan years - is that cutting taxes and regulations to make it easier for the rich to get richer would result in a rising economic tide that would lift all boats, because wealthy investors would be "job creators".

It hasn't turned out that way, according to research results of Stiglitz and other researchers on economic inequality, including a research team at the Organization for Economic Cooperation and Development (OECD), a club of the world's wealthiest countries, or Thomas Piketty, acclaimed author of "Capital in the 21st Century," which looked at long-term data on wealth concentration.

"The rich get richer, while everyone else falls behind. The game is rigged, and the people who rigged it want it to stay that way," De Blasio and Warren wrote in their op-ed. "When the economy works for everyone, consumers have money to spend at businesses, and when businesses have more customers, they build more factories, hire more workers and sell more products - and the economy grows."