Step back in time in Germany's Black Forest

Single women wore hats with red pom-poms and bread came via the water mill. While Germany's Black Forest is famous for its cake and cuckoo clocks, the Vogtsbauernhof outdoor museum shows what life there was really like.

Located in Germany's southwestern most corner, the Black Forest is an expansive area rich in tradition. Many of the stereotypes we associate as archetypically German are, in reality, native to the Black Forest area - like the cuckoo clock and the cherry liquor-infused Black Forest cake.

Bordering both Switzerland and France, the Black Forest region doesn't have an all-encompassing identity, however, having been influenced not only by the styles and mores of its border countries but also by the practicalities of life in the region. In the larger cities, the aesthetics are homogenous.

Baden-Baden in the northwestern - or High Black Forest - area is famous for its 19th-century French-style villas with filigreed balconies and pastel hues. In the lake district south of Freiburg, architectural standards for new buildings not only have a height constraint but also demand the use of timber framing. It's a look often associated with Germany: slant-roofed houses with wooden beams and expansive balconies, red geraniums tumbling from railings onto the housing facades.

Yet outside of the more modern towns, architecture was more pragmatic in nature as the thick forests that give the Black Forest its name also meant villages were relatively cut off from the outside world and residents there needed to be self-sustaining.

The Vogtsbauernhof Open Air Museum in Gutach tries to capture those differences in villages as it provides a glimpse into pre-20th-century life in the region. Originally conceived as a museum dedicated to the agriculture and farming communities in the thick forests of Germany's hilly Southwest, the museum cropped up as an assembly of old, historical buildings relocated from nearby villages.

Stepping inside one, visitors can learn about 17th-century life in a self-sufficient farmhouse, where wood-burning stoves in the kitchen served as the main source of heat and offered protection against the harsh winters outside, while also providing sustenance. 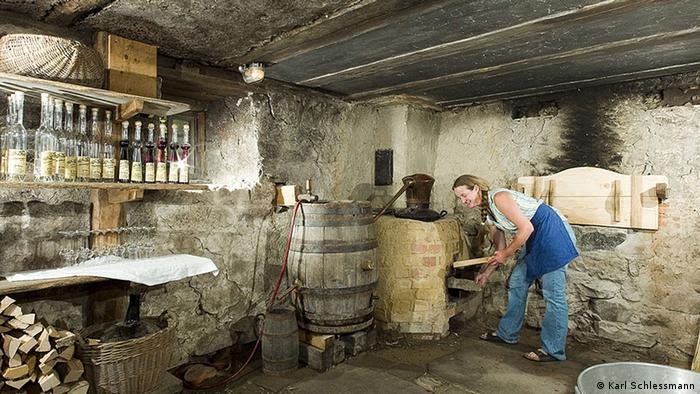 From outside, the thatched-roof building appears large and is nearly barn-like in its size; the narrow staircases and low ceilings inside reveal, however, how claustrophobic life with an extended family here must have been.

Each building has its own unique characteristics and brief explanations about its significance in the village it was removed from. Inside, small displays give insight into life in the Black Forest villages from the 16th to 19th centuries. Visitors can read plaques explaining antiquated cooking methods or loom weaving techniques while learning about the harshness of life in the remote forests.

Demonstrations from before the industrial revolution

In between the larger farmhouses are a smattering of outposts dedicated to the very particular tasks involved in self-sufficient living before the Industrial Revolution. In one, a mechanical saw chops away at logs a half-meter in circumference. In another, a water mill demonstrates the old-fashioned process of grinding grains into meal. If you time your visit just right, you can see the sawing and grinding in action.

Visitors following the well-marked path through the museum will come across well-plotted gardens explaining the utility of many plants native to the region and learn from guides dressed in traditional clothing about the particulars of animal farming in the forest.

The rivalries between the villages dating back centuries are also explained, as is the meaning of the clothing worn. The pom-pom hat worn by women in traditional Black Forest garb, for example, will tell you if a woman is single (red pom-poms) or married (black).

While the schedule changes daily, there are always special events running throughout the museum's season - from Easter to October, plus one weekend during the Advent season. Re-enactments of historical battles between two villages are highlights on the agenda, as is the annual historical Christmas celebration in the snowy forest.

And though the focus of the museum itself is on "the good old days," thanks to modern technology, arrival by train brings you straight to the front gates of the Vogtsbauernhof after a breath-taking tour through the less-traveled parts of the Black Forest.

Click on the gallery above for a tour of the Vogtsbauernhof outdoor museum in Gutach. The gallery below share more great reasons to plan a trip to the Black Forest region.

The beauty of the Black Forest

No easy feat, getting a squirrel, dormouse or wood grouse in front of the camera. For their book on the Black Forest, Klaus Echle and Joachim Wimmer capture the flora and fauna of the nature park. (25.05.2016)

Travel tips for the Black Forest

10 reasons to visit the Black Forest