The Special Prosecution body in Macedonia was set up to rein in corruption and criminal conduct by officials. It is led by three women who have become national heroines, as Kristina Ozimec reports from Skopje. 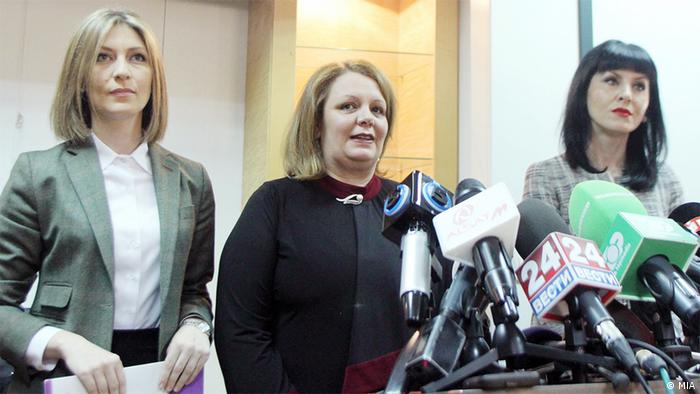 Prosecutors Katica Janeva, Fatime Fetai, Lence Ristoska have become the heros of the fight against in corruption.

Lumi Bekiri is a familiar face at Macedonia's "Colorful Revolution" protests, which have taken place for five weeks now. The 21-year-old student frequently travels the 30 kilometers (18 miles) from his home in Kumanovo to Skopje, the capital, where protests start at 6 p.m. daily in front of the Special Prosecution (SJO) offices as a show of support for the newly formed institution.

"The prosecutors are a strong ray of light in the darkest situation of our country," Bekiri said. "They are the hope and pillar of the state which we want to build in the future - where justice will be respected and we are all going to be equal in front of the law."

The daily protests started after President Gjorge Ivanov decided to pardon all politicians and their associates who had been implicated in a massive wiretapping scandal. The move, called unconstitutional by leading law experts, deepened Macedonia's already troubling political crisis. That decision, believed to have been coordinated with the ruling VMRO-DPMNE party, was seen as an attack on the SJO, which has a mandate to investigate the accusations that the government wiretapped more than 20,000 people. 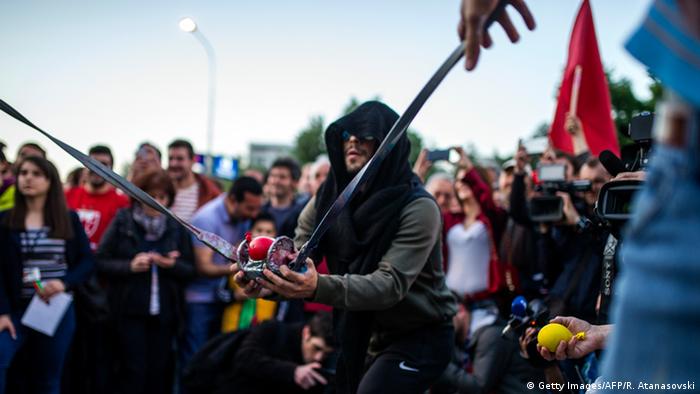 Heroines of the 'Colorful Revolution'

For Bekiri and other participants in the Colorful Revolution, it was no coincidence that the SJO christened its first case "Titanic." It was a message to former Prime Minister Nikola Gruevski and his closest allies that their ship was sinking. This had been unimaginable in a country where, only a year or so ago, people were afraid to loudly criticize the government in bars and cafes - a country where many still are.

And it's especially symbolic that the biggest case in modern Macedonian history is being prosecuted by a trio of women. In the past 10 years, Gruevski and his cronies built a corrupt system based on intimidation and clientelism, but also on limiting women's rights and promoting machoism, chauvinism, homophobia and anti-feminism. 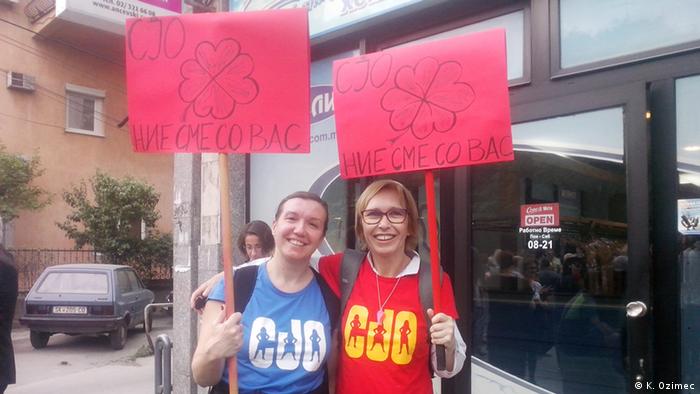 The images of the prosecutors Katica Janeva, Fatime Fetai and Lence Ristoska can be seen on T-shirts, placards, flags, badges and even coffee mugs. A "Support for SJO" T-shirt has become one of Macedonia's most popular. Designers created different designs showing support for the Colorful Revolution and the SJO and shared them for free online so that protesters can print their own favorite politically engaged materials.

The gender of the prosecutors shouldn't matter, of course, but political, professional and personal equality are still a long way off for most women in Macedonia, and many Macedonians have found significance in the notion that the prosecutors are operating in the spirit of Justitia, the Roman goddess of justice. Fetai said the public response to the SJO's work showed that Macedonia needed to increase the presence of women in politics, business and culture. "The appearance of three prosecutors is one such reaction, the rhythm that pulses instantly with Macedonian society," Fetai told DW. "I think it is important to highlight the fact that a woman can bear the load of the most complicated work in society and succeed." 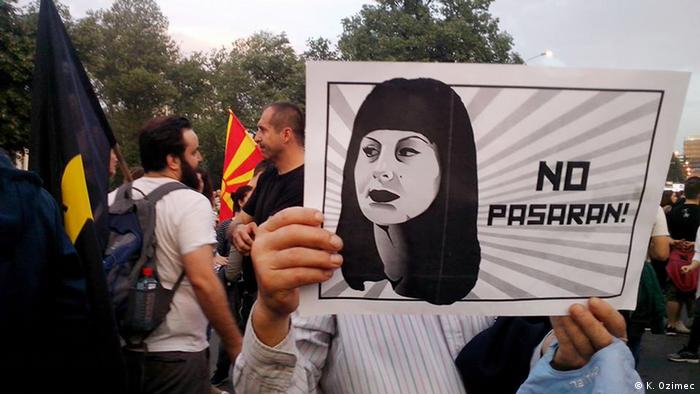 Fatime Fetai is one of the protesters' heros

Ristoska said that, though Macedonia's laws grant women certain rights in theory, equality remains a long way off in practice. "Therefore I consider it necessary to point out all the positive examples of successful women and the challenges they face in achieving their career goals and finding its rightful place in the social, political and cultural life in the country," she told DW.

Macedonia is a society with complicated relations between ethnic groups. Prejudice toward minorities - especially Albanians, who constitute about 25 percent of the population - are exploited and manipulated by pro-government media and in public discourse.

Fetai, an ethnic Albanian, said people from different backgrounds did not have many real problems between them, so the ruling class had worked to create and exploit conflicts. "The political agenda, interest and success of the political elites who led the country so far was based on demotion of those relations," she said. "And the citizens believed that coexistence among different ethnicities is not possible."

The prosecutor said the reactions to her work showed that Macedonian society is maturing in this respect. "Through the role of the Special Public Prosecutor's Office, through me as an Albanian and other prosecutors - Macedonians and Albanians - and the genuine mission of this prosecution to establish the rule of law in the republic, the citizens are given the necessary input that we are all the same and equal," Fetai said.

The student Bekiri and other protesters plan to continue their Colorful Revolution until Ivanov withdraws his decision to pardon the politicians who have been charged with crimes. They are demanding the establishment of a Criminal Court unit that would be responsible for cases under the jurisdiction of the SJO and the formation of a technocratic government to organize fair elections.

"I am confident that the Special Prosecution will completely finish the work for which it has been established, and I base this belief on the faith in the complete potential of the human recourses in our prosecution," Fetai said. "And I am sure that we will write ourselves on the right side of history."

Thousands of people have protested in the Macedonian capital for a fourth night against the president's decision to grant pardons in a wiretapping scandal. The political crisis is deepening in the volatile Balkan state. (15.04.2016)