The EU Council President has piled on the misery for Theresa May as she tours Northern Ireland. His comments were condemned by the unionist DUP party, which wants to nix the deal's controversial Irish backstop. 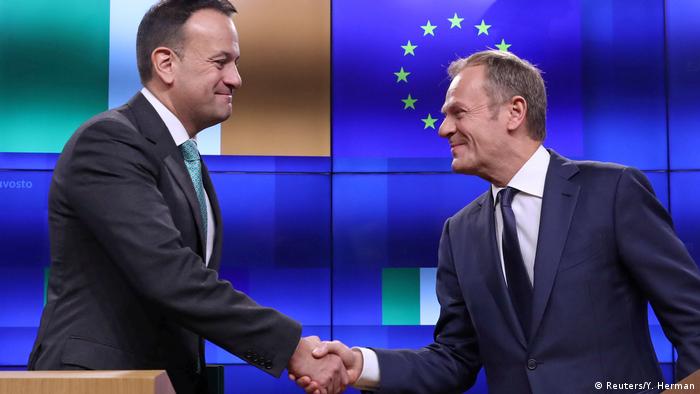 European Council President Donald Tusk did not mince words on Wednesday with regards to Brexit. Writing on Twitter, Tusk wrote: "I've been wondering what that special place in hell looks like, for those who promoted #Brexit, without even a sketch of a plan how to carry it out safely."

The president's comment was criticized by prominent pro-Brexit voices, such as Nigel Farage, who called Tusk and his colleagues "arrogant bullies," without addressing the criticism that Brexit campaigners put forward as an option without a concrete plan to implement it.

British Prime Minister Theresa May took a slightly more subdued, but no less critical tack, saying "it's a question for Donald Tusk as to whether he considers the use of that kind of language helpful."

May will be hoping that her visit to Brussels on Thursday is more helpful, as she races the clock to overcome the Brexit impasse.

EU Commission President Jean-Claude Juncker on Wednesday repeated the bloc’s position that it would not reopen the withdrawal agreement.

"Brexit is not a bilateral question between the Republic of Ireland and the UK," he said. "She knows the Commission is not prepared to reopen the issue."

Tusk's strong words came as he met Irish Prime Minister Leo Varadkar in Brussels, where the two affirmed that the EU's top concern is to avoid a hard Irish border after Brexit, considering the decades of violence and bloodshed that were only resolved by the 1998 Good Friday agreement.

"The top priority for us, remains the issue of the border on the island of Ireland, and the guarantee to maintain the peace process in accordance with the Good Friday Agreement. There is no room for speculation here. The EU itself is first and foremost a peace project. We will not gamble with peace; or put a sell-by date on reconciliation," Tusk said in a statement.

The UK has also maintained that avoiding a hard border in Ireland is a major priority. Both sides agreed as part of the withdrawal agreement on a "backstop," a measure put in place to protect the status quo in Ireland even if no post-withdrawal trade deal is reached between the British parliament and the EU.

But Northern Ireland's conservative unionist DUP party, which props up May's government, has insisted that the backstop be scrapped. May was holding meetings with top DUP officials on Wednesday, hoping to reach a compromise as the March 29 Brexit deadline looms.

The DUP also had choice words for Tusk's Twitter tirade, calling him a "devilish, trident-wielding, euromaniac."

Foreign Minister Annalena Baerbock has written an opinion piece with her Irish counterpart in a British paper, saying the UK was "not engaging in good faith" with its plans to change the Northern Ireland protocol.