SPD's Steinbrück tipped as challenger to Merkel in 2013 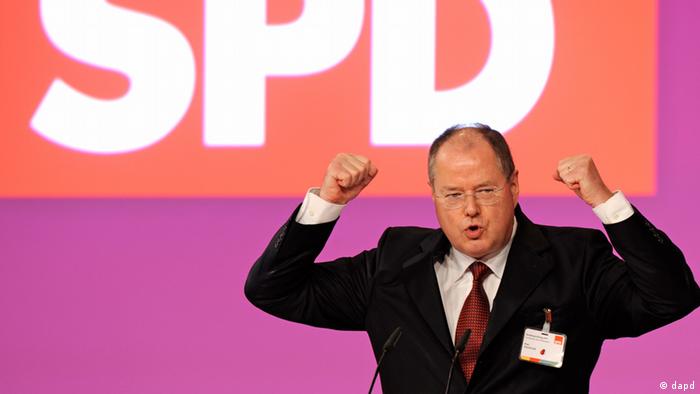 The news agency dpa has also said another prospective SPD candidate, Frank-Walter Steinmeier, is no longer available. He unsuccessfully challenged Merkel in 2009, resulting in a post-war electoral low for the SPD of 23 percent.

Since then, Merkel has led a center-right coalition government, comprising her conservative Christian Democrats, Bavarian allies, and the pro-business liberal Free Democrats.

So far, there has been no confirmation from SPD leaders of the media speculation. Two news agencies, dpa and AFP, say, however, that the Social Democrats have scheduled a press conference for Friday afternoon in Berlin.

The mass-circulation Bild, citing sources within the center-left SPD, had said earlier on Friday that the party's chairman Sigmar Gabriel, who had been a third possibility, would nominate Steinbrück at a special SPD executive meeting on Monday. 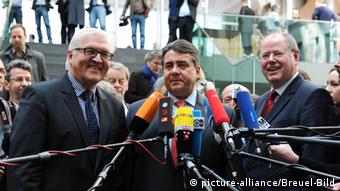 Once there were three - Steinmeier (L), Gabriel and Steinbrück (R)

The party is bringing forward the decision, Bild said, due to mounting pressure from the SPD's regional state branches in recent days.

Previously, the SPD leadership had said a decision on candidacy would not be made until early 2013.

Steinbrück, 65, is the former premier of Germany's most populous state North Rhine-Westphalia. He has a reputation as an outspoken critic on global financial issues, including bankers' behavior and Switzerland's policy on tax evaders.

Fresh survey results published on Friday by the German ZDF public television station showed Merkel polling as preferred chancellor on 53 percent. Trailing her were the SPD's Steinbrück and Steinmeier, each on 36 percent. Gabriel polled only 27 percent.

Overall, Merkel's Christian Democrat Union (CDU) polled 38 percent among respondents, when asked which party they would vote for. The Social Democrats scored 29 percent, with the Greens on 13 percent, the newly formed Pirate party on six percent. The FDP liberals polled four percent, echoing its historical slump in support.

Steinbruck "most dangerous" for Merkel

Prominent pollster Klaus-Peter Schöppner of the survey institute Tns-Emnid said the most important step was that the SPD was about to end "its long drawn-out leadership discussion."

The Social Democrats and Greens have handily won the election in Germany's biggest state. Hannelore Kraft is now an obvious rival to Angela Merkel in next year's national election. (14.05.2012)

The state premier in Germany's most populous region, SPD figurehead Hannelore Kraft, has told a major newspaper her government will continue buying black market data on German tax dodgers who use Swiss banks. (19.08.2012)