German Interior Minister Hans-Peter Friedrich says he is satisfied with US assurances about spying activities. Weeks ahead of a federal election though, the opposition is not about to let the issue go. 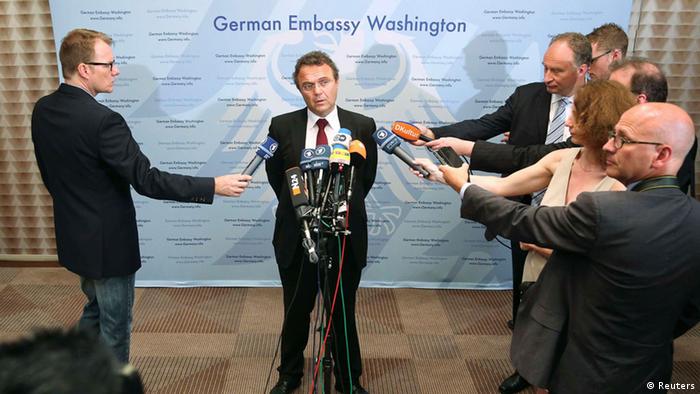 Neither of Germany's main opposition parties was satisfied with the assurances Friedrich (pictured above) said he received during his meetings with senior US officials in Washington on Friday.

Thomas Oppermann the parliamentary floor leader of the Social Democrats said Friedrich's trip had not achieved much.

"Minister Friedrich is returning empty-handed," Oppermann said in an interview published in the Saturday edition of the Passauer Neue Presse newspaper. "We have not moved a single step forward on any of the key points"”

As talks on the Trans-Atlantic Trade and Investment Partnership began this week in Washington, a second topic loomed large: US intelligence programs. Germany wanted to make sure the issue didn't fade into the background. (13.07.2013)

The liberal Free Democrats (FDP), the junior partners in Chancellor Angela Merkel's conservative coalition, announced, however, that they were prepared to accept the US officials at their word. At the same time the FDP's deputy parliamentary floor leader, Gisela Piltz said the party would "repeatedy demand" that the US live up to its pledge to be more transparent about its activities.

The SPD and the Greens hope to win enough support to replace Merkel's Christian Democrats and the FDP after Germans go to the polls in a federal election on September 22.

Friedrich told reporters that US officials had promised to begin a "declassification process" to allow their German counterparts to be better informed about the activities of US intelligence services. The interior minister also pointed to what he described as "concrete results," including an agreement to rescind a 1960s NATO accord that allowed US intelligence agents to take any necessary action to protect US troops stationed in Germany.

Friedrich also expressed understanding for the US position, saying that the country had heightened needs following the September 11, 2001, attacks in New York and Washington.

"The program is strictly focused only on terrorism and proliferation of weapons of mass destruction, and organized crime," the German interior minister said.

Friedrich said that he had learned that surveillance conducted by the US National Security Agency (NSA) had uncovered and helped prevent a total of 45 terrorist plots worldwide, indlding 25 in Europe and five in Germany.

He also said he was satisfied that Germany's concerns were taken seriously in Washington.

"Everyone here in the United States understood that there is high sensitivity in Germany over protection of the private sphere," Friedrich said.

Revelations made by the US fugitive Edward Snowden about an NSA surveillance program known as Prism have stirred up controversy in Germany in particular because of sensitivities about data protection, in part related to memories of repression by East Germany's Stasi and the Gestapo under the Nazis.