Spain's Socialist Party (PSOE) leader Pedro Sanchez has stepped down after losing a party vote. The party has been wracked by dissent and more than half of the party executive quit in a bid to oust their leader. 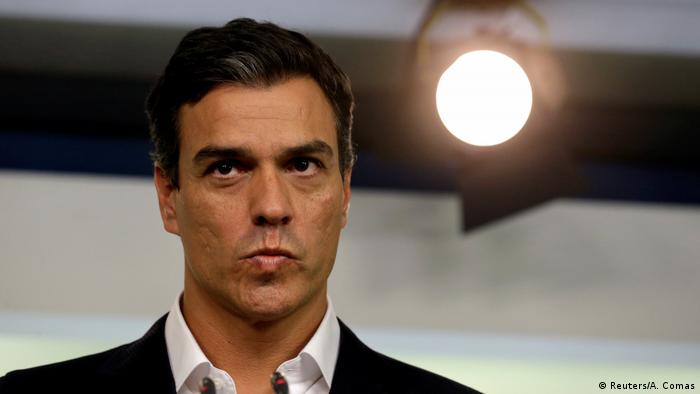 PSOE leader Pedro Sanchez announced his resignation after losing 107 to 132 in a vote among top party members on Saturday.

Prior to the gathering, and in his first public comments since a dramatic walk-out which saw 17 members of the executive attempt to force his resignation,Sanchez said he would open the leadership race up to a vote of the country's party members and hinted he would resign if a majority came out against his vision of the party's platform - in other words if they favored abstaining. "Obviously I could not put into practice a decision that I don't agree with," he said.

After losing the party assembly vote late Saturday, Sanchez remained true to his word and resigned as leader of the party.

The country has been without a fully-functioning executive since last December as rivals failed to agree on a government following two elections in which none of the main parties won an absolute majority.

The conservative Popular Party (PP) won both elections, but without enough seats to rule alone and was forced into negotiating a minority government which was voted down in parliament earlier this month.

Sanchez had been resolute in his opposition to allowing conservative Prime Minister Mariano Rajoy to rule for another term, pointing to repeated corruption scandals hitting the PP and rising wealth inequalities sparked by years of austerity.

"Spain doesn't deserve another four years of Mariano Rajoy at the head of the Spanish government - four more years with a prime minister who has systematically lied to Spanish society," Sanchez said Friday.

The left-leaning Socialist Party is pivotal to breaking the deadlock as it holds 85 out of the 350 seats in Spain's lower house of parliament.

Spain's acting Prime Minister Mariano Rajoy warned that the country may be forced to hold a third round of elections within a year. He accused his Socialist rival of refusing to cooperate in forming a government. (03.08.2016)

Spain's Socialist party has been unable to survive a second confidence vote and form a governing coalition. This leaves Madrid in a precarious state of limbo. (04.03.2016)