The organization of Spain's sex workers has hit the headlines after the labor minister was shocked to find out her department had approved their first trade union, OTRAS. Magdalena Valerio said she had been deceived. 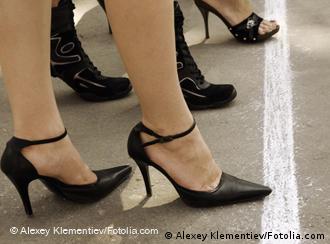 Spain's Sex Workers Organization (OTRAS) was given official approval in early August after the General Direction of Labor (DGT) found that the organization met the requirements of the Freedom of Association and Royal Decree for the deposit of statutes by unions and business organizations.

But on Thursday, Labor Minister Magdalena Valerio said she was deceived and shocked to find out that her department had approved the registration of the first such organization in Spain. OTRAS members include men and women engaged in paid sex.

Valerio said that although the paperwork was technically correct, the government would not "back a union of an illegal activity that violates the fundamental rights of women and men who, because of poverty or other circumstances, give their bodies for others to abuse them."

On Friday, government spokeswoman Isabel Celaa said the state legal counsel (Abogacía del Estado) had already reviewed how the registration of the union could be annulled and that it "does not seem difficult" to fix.

She added that the quickest way was to use the full right of the state to revoke the registration.

The government would "not accept in any way that there would be a union of sex workers," Celaa added.

Prime Minister Pedro Sanchez wrote on Thursday: "Prostitution is not legal in Spain and this government will not give support to any organization for this illicit activity."

Sanchez's Cabinet has a majority of women members. "This is a feminist government, a supporter of the abolition of prostitution," the prime minister tweeted.

Concha Borrell, secretary general of OTRAS, said that for her members it was "just a question of justice."

She criticized the government for "hiding behind the curtain of white, heterosexual and bourgeois feminism to say that seeking labor rights for an impoverished and stigmatized group is an atrocity."

Prostitution in Spain is tolerated but unregulated. Sex workers are not punished for offering paid services, so long as they do not do so in public spaces. The law is focused on human trafficking.

No government has yet approached the issue of legalizing sex work, and it appears that the current Socialist government is less than keen to take the opportunity to do so.

Celaa agreed that prostitution was not regulated in Spain and that the issue had not been discussed during the government's meeting on Friday.

Women's rights activist Marisa Soleto, president of Fundacion Mujeres, said: "Prostitution is not a job, it's a submission of women into slavery and into a marked situation of inequality between men and women."

Prostitution is legal in the Netherlands, Switzerland, Austria and in Germany.

A 33-year-old man from Spain has been found guilty of rape, sexual abuse, forced prostitution and producing child pornography. His victim was a young German boy whose mother sold him for sex on the darknet. (06.08.2018)