Spain's government has asked an advisory body about the feasability of appealing Carles Puigdemont's regional presidential nomination. If it is possible, the government plans to file an appeal at Spain's top court. 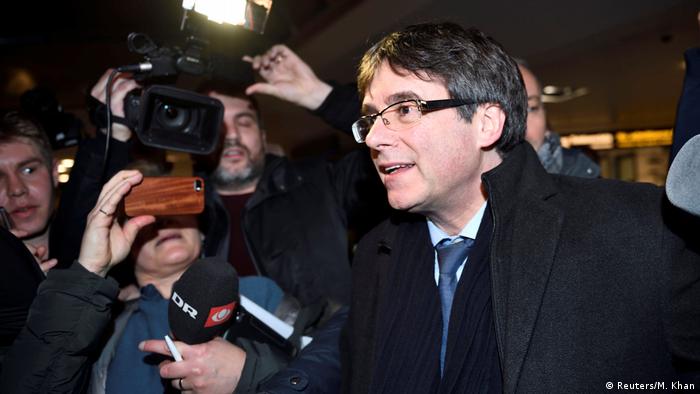 Spanish Deputy Prime Minister Soraya Saenz de Santamaria said that the outstanding warrant for Puigdemont's arrest meant that he could not take up the public office.

Read more: Opinion: After Catalan elections, it's back to the drawing board

Puigdemont 'does not enjoy full rights'

Saenz de Santamaria said the Spanish government had asked Spain's Council of State, an advisory body to the government, to provide an opinion on whether it can appeal the Catalan parliament speaker's nomination of Puigdemont to the constitutional court.

If the council's opinion matched the Madrid government's, the appeal would be filed immediately.

"The parliament speaker has put forward as candidate someone who does not enjoy his full rights, who has no right to freedom of movement," Soraya Saenz de Santamaria said. "Mr. Torrent must have known that Mr. Puigdemont could not enter Spain without being detained."

Spain is seeking Puigdemont's arrest and therefore does not wish for him to show up in the Catalan parliament without it noticing. On Tuesday, Interior Minister Juan Ignacio Zoido said authorities were "taking steps along the border and inside the country, everywhere, to see that that does not happen."

"We are doing it in such a way that he cannot enter [the Catalan parliament] even in the boot of a car," he told Spanish television.

How the Catalonia crisis unfolded: On October 1 last year, Catalonia went ahead with an independence referendum that had been declared illegal by the Spanish government and courts.

The result: While around 90 percent of participants voted for independence, the voter turnout was only 43 percent as opponents boycotted the vote. In the Catalan parliamentary vote, which passed 70 to 10, dozens of opposition lawmakers also boycotted the ballot.

Why is Madrid against Catalan independence: Concerns have been raised about what Catalonia's independence would mean for Spain's already ailing economy. Catalonia is home to 7.5 million people, roughly 16 percent of Spain's total population, and generates more than one fifth of the country's GDP. According to figures from the European Commission, Catalonia's exports account for 20 percent of the Spanish total. Moreover, about 25 percent of foreign investment in Spain is in Catalonia.

What happens next: Puigdemont has said he could be sworn in remotely from Brussels, which Spain's central government is against. On Wednesday, he said he should be present at the parliamentary session due next week where lawmakers would officially vote him in. However, Deputy Prime Minister Saenz de Santamaria said there was "an arrest warrant against Mr. Puigdemont in Spain, so the first thing he should do in Spain is go to Spanish judicial authorities."

Madrid has vowed to reissue an international arrest warrant for the former president of Catalonia if he travels to Denmark. Carles Puigdemont is wanted in Spain for involvement in a controversial independence referendum. (21.01.2018)

Catalonia's president declared independence - but then immediately made overtures to talk. A sensible move and an offer the central government in Madrid should not turn down, DW's Maria Santacecilia says. (11.10.2017)

The newly elected Catalan parliament has met after a failed attempt at secession from Spain last year. The question remains whether sacked leader Carles Puigdemont will be allowed to present himself for re-election. (17.01.2018)

A new report suggests that the Spanish government used the controversial Pegasus software to monitor the phones of dozens of Catalan independence figures.