Spanish authorities have reported a record number of foreign tourists in the southern European nation. But some experts said they were worried per-capita spending had been decreasing for many years now. 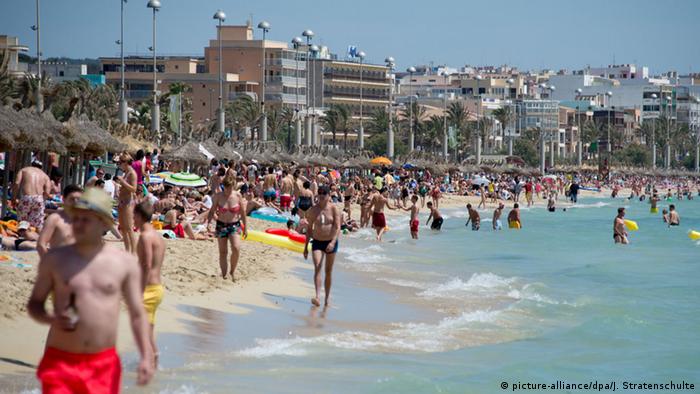 It said a total of 68.1 million tourists flocked to the country last year, marking the third consecutive year of record-beating numbers.

The renewed surge was greatly helped by the fact that militant violence in countries such as Egypt and Tunisia prompted holidaymakers to seek sun nearer to home.

Most tourists visiting the southern eurozone nation came from Britain, followed by travelers from France and Germany.

Globally, Spain is the third most popular tourist destination behind France and the US, the statistics office reports.

Looking beyond the beach

But while the number of foreign tourists increased again in 2015, industry association Exceltur warned there was another drop in spending per head last year, the 15th year in a row of declines.

Tourist authorities have long sought to promote Spanish attractions and culture beyond the beaches, such as the historic cities of Seville and Granada or the museums and galleries of Madrid.

"A tourism model based on sun and sand and competing on the lowest price is all very well, but it's not sustainable in the long term," Ricard Santoma from the Sant Ignasi School of Tourism and Hospitality Management told Reuters.

The success of the sector is crucial as it accounts for 11 percent of the country's economic output and employs 2 million people.